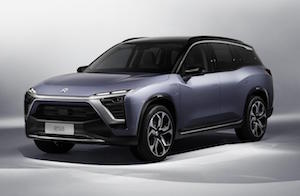 China – The seven-seater electric SUV, intended for the Chinese market, will enter series production at the end of 2017. The ESB is one of 11 vehicles the company is displaying at the Shanghai motor show this month. NIO also announced that it will begin taking orders for its $1.48m supercar, the EP9.

The ESB is almost 5.0 metres long, with a wheelbase of nearly 3.0 metres, and comprises an aluminium body and chassis plus front and rear motors with electric all-wheel drive. NIO says its swappable battery will “provide a charging experience that surpasses refuelling at gas stations”.

William Li, founder and chairman of NIO, described the ESB as a “statement of our vision and technical and manufacturing capabilities” and a “best-in-class product that showcases what is possible with electric vehicles”. NIO says that the manufacturing and supply chain needed for its series production is already in place.

Meanwhile, NIO first unveiled the EP9, claimed to be the fastest electric car in the world, in November 2016. The first six units were for investors but ten more will now be made to order.