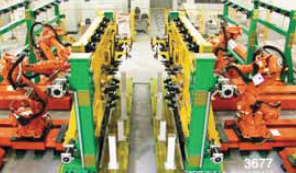 ABB Robotics has launched a GateFramer robotic car body framing system, which enables up to six different car body variants to be framed on the same line by swapping gates that hold the tools for each car model.

The company says this system offers a consistent gate exchange time of 18 seconds for a random sequence of model production.

The GateFramer features up to four integrated welding robots behind each gate and up to six shelf-mounted robots on an overhead platform, allowing a total of up to 14 robots into each station. Up to 77 geometry welds can be completed inside the framer. A gate docking feature locates the gates into fi xed pillars ensuring that the gates are positioned in a highly repeatable manner and offering a +/- 0.1mm repeatability, claims ABB. The modularity of the GateFramer allows for the system to be expanded as needed.