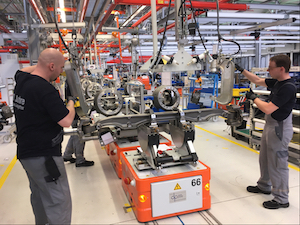 Germany – From 2018, non-driven axles for MAN and Scania vehicles will be produced on the same line. The project cost €30m ($32m) and has created 200 jobs at the plant.

“The new direction that the MAN Salzgitter site is taking within the context of our PACE2017 programme for the future is continuing to take shape through this,” commented Thomas Rennemann, plant manager at Salzgitter. “Our plant plays a key role in Volkswagen’s commercial vehicle holding group, Volkswagen Truck & Bus.”

Using the new line, MAN intends to produce 940 axles per day in two shifts. Other improvements in production will include new paint technologies, such as a CO2 washer and a dry filter for residues, 16 robots for corrosion protection and 76 driverless transportation vehicles in assembly and logistics.

MAN has been assembling axles at Salzgitter since 1986, when it took over an existing line operated by Braunschweig. It subsequently set up the A1 and A2 lines, dismantled the old A3 line and commissioned A0 and A3. In 2006, the plant produced 100,000 units in one year for the first time and a few years later volumes reached 141,000 in two shifts.