The senior GM – Manufacturing at Chakan Plant discusses the challenges of producing a diverse range of vehicles at a single location, plus plans for expansion 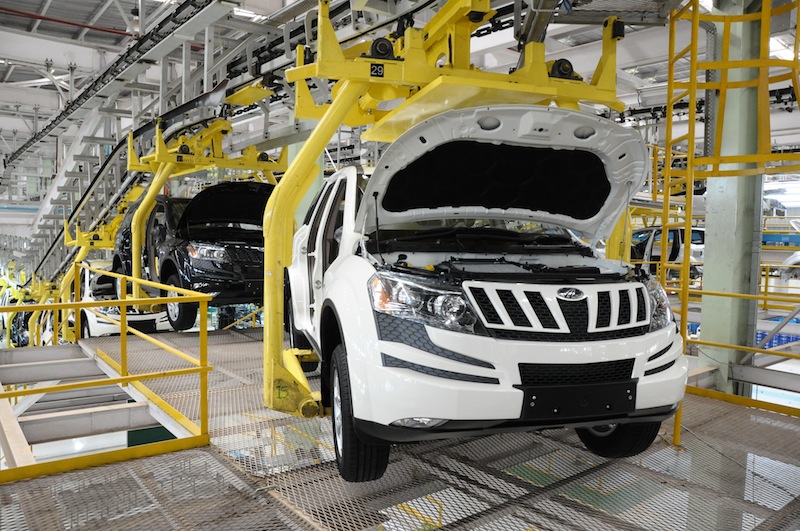 AMS: Can you provide some background on Chakan Plant?
Sairan Vedapudi (SV): We acquired this site in 2007, and although at that time the economic conditions were challenging, the decision was taken to go ahead with the construction of the plant. This is a very large site, covering some 700 acres. The project was completed in 2008 with start of production [SOP] commencing just 22 months after construction began. Even today we are still finishing some areas of the plant. Because we were building the plant during a recession, our plan was to start production as quickly as possible, then add further models and lines later. The first model of the line was the LTV pick-up in 2009, followed by the trucks in 2010.

Another important feature of this plant is the range of vehicles we produce here; everything from one-ton pick-ups up to 40-ton trucks. We also produce a premium range of SUVs comprising the XUV500 and the Rexton.

We have one press shop and five bodyshops on-site. The press shop supplies all areas, producing all our A-class panels. We source the B- and C-class panels from outside suppliers. A large number of our suppliers are located nearby, and some on this site in a supplier park we have created.

AMS: That must be a very busy press shop to supply such a wide range of vehicles?
SV: Yes it is, especially given the large portfolio of products we produce here. All the bodyshops are housed under one roof. These produce bodies for the LTV light pick-up, the midsize Genio pick-up, our premium XUV500 and also our truck range, making the cabs. We also have the Rexton, which is an entirely different platform from the XUV, but the body panels etc are supplied to Chakan and then assembled here. It does share powertrain and some other components with the XUV.

AMS: How do you manage the paint operation for such widely different vehicles?
SV: We have two paintshops, one for the truck range and the other for the rest of the vehicles. The larger of the two handles the truck cabs and has a throughput of 45 jobs per hour. The paint lines are completely flexible, sequenced according to demand, and we also apply two different paint processes on the same line, depending on the vehicle.

AMS: How is the plant laid out?
SV: In our assembly block we have the truck line and a multi-model line, which builds LTV, Genio, Rexton and some Boleros. Our premium XUV500 has a dedicated assembly line. So, at the north end of the site are the assembly shops, with the press and bodyshops at the south end, and the two paintshops situated in between. This plant has been designed to be scalable in terms of adding production facilities as new models or increased demand require. We have the additional space here to expand.

• Vedapudi was awarded an MS in Manufacturing Engineering from Wayne State University, Michigan, and an MBA from Kelly School of Business Indiana University

AMS: What was the installed capacity here at SOP?
SV: Capacity is defined by the paintshop; everything else is scalable, expandable. This is a standard measure. It is currently at 270,000 units per year.

AMS: What is your current market share in India for trucks?
SV: We have produced a large number of truck models and variants, as there has been a lot of customisation and segmentation in the truck market, and it’s an important market that we are serving. We are probably number three in this market; Tata has the biggest share, around 80%; everyone else makes up the remaining 20% and there is a lot of competition, a lot of new players building trucks for the Indian market. The truck market has been in a huge slump in the last few years, but now we are seeing some signs of recovery, and we believe with our range of vehicles we are well placed to increase our market share.

AMS: How about the SUV market?
SV: The SUVs have done well and been well received in the market. Overall, the automobile market has been suffering and this has probably been the worst slump since the recession in 1975. We are optimistic that this year will improve. Things are very positive following the recent elections and the new government coming into power. We are hopeful that new policies will boost the automotive industry and we expect to see some momentum build in the next three to six months.

AMS: Given the capacity here at Chakan, are there any plans to introduce new models or platforms?
SV: Yes, we should be having some new products here next year but I can’t go into too much detail about that at present.

AMS: You mentioned earlier the flexibility of this plant. Would you produce any new models on an existing platform, or an entirely new platform?
SV: In terms of accommodating any new products, we are moving towards shared platform architectures with common components. The paint and assembly shops have enough flexibility but we would probably need a new bodyshop line for a different platform.

AMS: Is it more cost-effective to build a new bodyshop line rather than adapt an existing one?
SV: That depends on the commonality that is carried over. For example, GM for a long time had a philosophy of building two platforms with five models on a single line. That’s the level of flexibility they defined for production at that time. Mahindra is definitely moving in that direction where we want our bodyshops to be common platform-based. So we are getting into flexible framing and main line robotics to achieve that flexibility. There is a lot of new technology available and as we develop our bodyshops we are introducing this. So I’m sure our future bodyshops will feature completely flexible framing stations to accommodate multiple platforms.

AMS: How much of the production at Chakan is for export?
SV: All models we produce are exported. Overall, it is about 20% for export. It differs depending on the model, for example production of the Scorpio is 100% for export.

AMS: Where is your biggest market for this model?
SV: We sell a lot to South Africa, some to Chile. We also export to other regional markets such as Sri Lanka and Nepal. The XUV is also starting to make in-roads into Australia and Europe, so we’re seeing the demand for the premium product in the western markets and the utility vehicles in developing markets.

AMS: Looking at the production operations, which equipment supplier set up your press shop?
SV: The press line is a four-stage line from Schuler.

AMS: Do you build any powertrains here?
SV: We build engines for our heavy trucks, not just for vehicles produced here but also for our other businesses.

AMS: Which company supplied your paintshops?
SV: The paintshops are from Dürr. The smaller one is for the truck cabs and the larger for everything else, and it’s extremely flexible. We can be painting LTV pick-ups in the morning and switch to SUVs in the afternoon. It’s a complex paintshop operation applying different paint processes – high-solids and metallics – and handling multi-model sequencing.

AMS: Given that new platforms will be introduced here, are there plans to increase paintshop throughput?
SV: Yes, this would be the focus of the next phase of expansion here. The layout of the plant has been designed to allow for this.