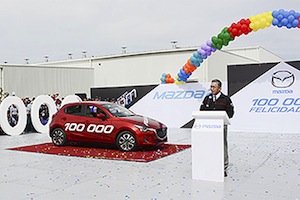 “We see this achievement as a milestone on our road towards achieving our mission of making MMVO one of the most important strategic locations in Mazda's global manufacturing footprint,” said Keishi Egawa, MMVO president and CEO.

Mass production of the all-new Mazda2 started in October 2014, when operations also began at the engine machining plant. In the same month, MMVO announced a capacity increase to 250,000 units per year by fiscal year ending 2016.