With primerless paint and advanced water treatment facilities, the MINI Plant Oxford paintshop is working hard to maintain the quality of finish that its customers expect while working towards a greener process

Ian ‘Tom’ Bennett has the title of Value Added Production Systems Manager but as he told me, he spends all his time in the paintshop at MINI Plant Oxford, helping to maintain and improve the process. He came to the Oxford plant as a sprayer “more years ago than I care to remember”, and was at Rover when it developed the new MINI, before BMW took over the project. The paint line at MINI is unusual in many respects; one which stands out is the use of ‘paint bars’ instead of full skids. The body-in-white is mounted on separate front and rear bars that also carry the information for each body. This data is carried in a plate affixed to the paint bar; the identity of each body are picked up automatically by vision cameras and scanners throughout the plant and the details of body style, main colour and roof colour is sent to every station. The paintshop is the owner of these bars as Bennett tells me: “We, the paintshop, ‘own’ the paint bars, they are part of our process, but they get fitted by body-in-white and get taken off by assembly so we don’t really see them off the body. We own them because the geometry and cleanliness are critical to maintain high levels of quality performance.”

The Pretreatment and Electrocoat application processes are the first two stages of car production in the Paintshop. Together they provide the fundamental corrosion protection coating to last the lifetime of the car, and to meet the corrosion and antiperforation warranties for MINI. 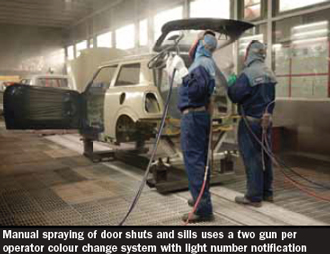 The Pretreatment stages, consisting of both dip tanks and rinses ensure the cleanliness and preparation for a Phosphate coating of the body. The initial three stages concentrate on removal of all oils, greases and general dirt with aggressive Alkali Cleaners.

After water rinsing, the bodies enter the Conditioner, or “Activation” bath, a chemical composition designed to prepare the steel substrate for the all important Zinc Phosphate coating.

Immersion in the Phosphate dip tank provides a conversion coating of insoluble crystalline phosphate across all metal surfaces, and gives a protection layer of approximately 2μm thickness. This is then “Passivated”, which is a Zirconium based process dip that prevents further Phosphate crystal growth, and fills in the gaps between crystals to smooth out the surface.

The bodies then receive a final dip rinse with demin water before entry to the Electrocoat bath. In the majority of the Pretreatment stages, water usage is significantly reduced by cascades from bath to bath against the flow of the conveyor. In addition all rinse water is filtered and reused.

The function of the Electrocoat stage (or to be precise the Cathodic Electrophoretic Deposition Process) is to provide a protective paint layer over the whole car body. This is achieved with electrically charged paint by means of a row of side anodes inside the bath. The electro-paint is 80% water, the remainder is Paint made from resin, pigment, solvents and pH adjusters. Over 1,000,000kg of paint are used annually. Only when the paint solids are within specification, the bath level confirmed, bath temperature achieved and rectifier voltages confirmed are the bodies ready for entry to the bath. The bodies are submerged in the bath for approximately 4 minutes, this is enough to give a coating thickness of 20 microns which provides base protection against corrosion from stone chipping etc. The excess paint on the body known as “cream-coat” is then rinsed and recycled in a three stage process known as Ultrafiltration. The paint solids are filtered and returned to the bath. A final demin water spray completes the process before a 30 minute stoving in the Electrocoat oven at 180°C. The car bodies are then perfectly prepared for seam sealing and paint application.

Maximum production rate through the Pretreatment and Electrocoat areas at Plant Oxford with a conveyor linespeed of 6.53m/min is 59 units per hour. The average surface area of a MINI to be coated is 73m². All critical process parameters of all process steps are continually analysed and adjusted where necessary to ensure that all specifications are met. The Pre-treatment process baths are continually dosed with the appropriate amount of Alkali cleaners, Zinc Phosphate and other chemical additions to maintain the effectiveness of the formulations, in order to guarantee the best possible corrosion protection.

In the seam sealer hall, all of the panel joins are covered in the normal way, all interior seam seal (including inside the clinched door edges) is manually applied but feasibility investigations are underway to automate this in the future. Seams on the underside of the car are sealed by two banks of vision-guided ABB robots.

The system is guided by four holes on each body that are known as ‘absolutes’ – the datum points that identify each different body style. “The system checks the location of the hole and compares it with its ‘known’ datum point, identifies the body style and then offsets the robots in x, y and z axes. The sealant bead may be as little as 10 mm so the measurements are critical” says Bennett.

The system uses approximately four tons of Henkel sealer per week of production. Sound deadening pads are self-adhesive and some are magnetised for the vertical and near-vertical surfaces. After sealing, standard ostrich feather ‘dusters’ are used on the bodies to clean off dirt and dust, before the body moves to colour coat.

Underbonnet, door interiors, part of the door sills and all shuts are manually sprayed, with 16 spray operators who rotate tasks to avoid ergonomic strain. Gun changeover is indicated by an LED number box system. Each sprayer has two guns, one in use while the other is being automatically charged with the colour for the next body.

Water based basecoat paints are used to paint the MINI. If the colour required is a solid colour, it is applied in a single application using machine / robots that electro statically charge the paint, externally from the machine as it distributed off the application. If the colour required is a metallic colour, it is applied in a double application. The first layer is applied using the same method as solid colours, but only applies 60% of the overall basecoat layer. The remaining 40% is the mica based paint that gives the metallic effect. This layer is applied in a second booth using machines/robots. Due to metallic mica within the paint, it is applied using air powered guns, rather than electrostatic application. There is no flash-off between these stations, the bodies are painted wet-on-wet. Then the body goes through an infrared oven to draw the moisture out of the basecoat and then on to the clearcoat stage.

Primerless painting is gaining popularity world-wide so I asked Bennett what his experience with it has been: “We are very satisfied with the primerless system; the high quality of our finish is due in the main to the quality of our e-coat. We have gone to what we might call the next generation of cleanliness of the BIW; there is no hiding the quality of the BIW when you do not have the build of a primer coat.”

I wondered whether the sums really add up for primerless – surely the e-coat quantity and thus cost must take up some of the savings of not running a primer coat? Bennett explained: “The e-coat is slightly higher build than in the past but the overall film build is slightly less than we used to apply when we used primer, it is now between 90 and 100 microns as opposed to the 110 - 120 microns of the past. This has also allowed us to almost double our productivity as we have changed the old primer booth into a colour booth. And of course we have saved the post-primer oven cost and space.”

Wet or dry – the clearcoat debate

Powder clearcoat has been used by BMW at its Leipzig plant but the feeling in the industry (and by some BMW insiders) is that its days are numbered with the company. I asked Bennett for his take on the powder/solvent/water-based clearcoat debate: “I do not see it coming in here [at MINI], even though it can help one go solvent-free. The next generation to be developed will be water-based clearcoat.

“In the old days we used to use some pretty nasty chemicals, I recall spraying ethyl acetate and butyl acetate lead-based paints when I started as a sprayer but now our solvent-based clearcoat waste is really well-controlled and it is as safe as possible. “When water-based clearcoat is perfected, the last piece of the clean, green and efficient paintshop jigsaw will fall into place.”