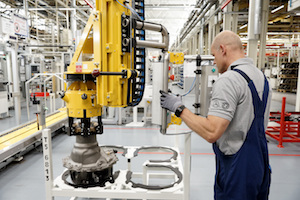 Germany – The “intelligent” axle, featuring actively controlled oil regulation, offers fuel and weight savings, according to Daimler. The component is being made on a highly automated assembly line which was installed over the past few months.

“The second generation of the Integrated Powertrain from Daimler Trucks – consisting of engine, transmission and axle – has already resulted in fuel savings of up to 6% for the Mercedes‑Benz Actros and ensures the lowest possible total cost of ownership,” explained Frank Reintjes, head of Global Powertrain and Manufacturing Engineering Trucks.

“The world's first intelligent truck axles even enable us to reduce fuel consumption by a further 0.5%,” he added. The New Final Drive features intelligent oil management which minimises the swirl of liquid and therefore reduces friction loss from the gears turning in the oil bath. Oil is supplied according to speed, torque and temperature.

The €30m ($33.8m) new assembly line at Kassel is described as “ultra-modern” by Daimler. Components inside the axle can now be directly welded together by a laser instead of being bolted. The resultant smooth mating surfaces help the reduction of oil swirl in the final drive and therefore fuel consumption.

Ludwig Pauss, site manager of Mercedes‑Benz Kassel, observed that not only customers will benefit from the introduction of the new axle. “Cutting-edge product technologies and extensive investments in production facilities ensure that the site will remain profitable and competitive in future,” he said.

Kassel is Daimler’s global centre of excellence for commercial vehicle axles and employs around 3,000 people. The new axle will also be made in Detroit, Michigan.