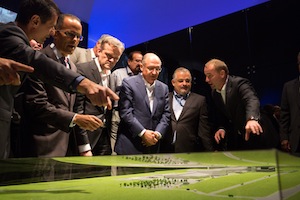 Brazil – The 500m reais ($172m) car plant near São Paulo will start production of the C-Class in Q1 2016, with the GLS compact SUV following in the middle of the year. The initial annual capacity will be 20,000 units, with potential to expand.

The establishment of the plant is expected to generate 3,000 jobs in the region, predominantly with suppliers and service providers. Mercedes-Benz is co-operating with SENAI, a national training organisation which has now set up a centre at Iracemápolis that will launch operations in the first half of 2015; a local recruitment drive will begin in the second half of the year. Personnel will be sent to existing plants in Brazil (Juiz de Fora), Germany, Hungary and India.

Mercedes-Benz says that the automation level of the plant will be “significantly lower” than at its traditional plants. “Machines don’t develop, build, or sell cars – people do. That’s why our focus is on our employees,” said Markus Schäfer, board member for Mercedes-Benz Cars, Manufacturing and Supply Chain Management. “With this approach, Iracemápolis will be one of the most flexible plants in our global production network, indicating our future trend.”

Philipp Schiemer, president of Mercedes-Benz Brazil and CEO Latin America, added: “With the new Mercedes-Benz plant in Iracemápolis, we will be the only company producing the full vehicle range in Latin America – from passenger cars and vans to trucks and buses.”