Mercedes: At home in Alabama

The first full Mercedes-Benz plant outside Germany continues to prosper, with multiple expansions and the recent addition of the C-Class and GLE Coupe. AMS reviews the manufacturing operation at Tuscaloosa 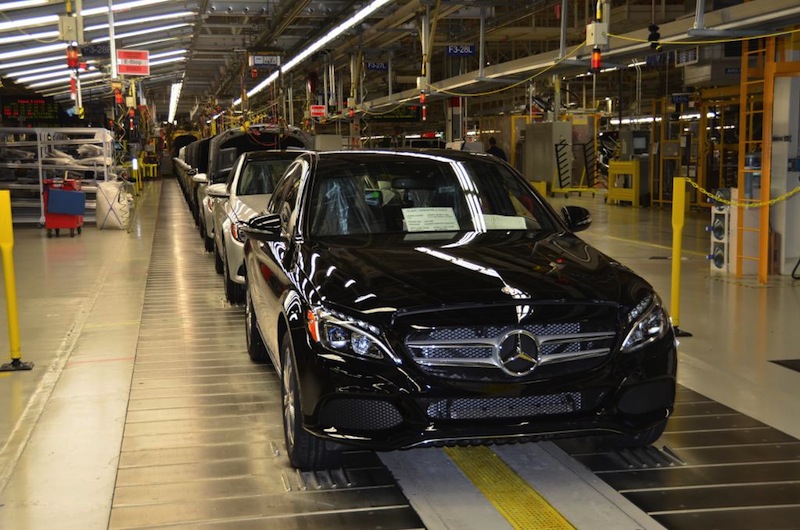 Founded in 1995, Tuscaloosa was the first full production plant for Mercedes-Benz outside Germany and marked the initial step in the expansion of the manufacturer’s global production network. Back then, Alabama was not home to the same number of automotive manufacturing facilities as it is now, making the German manufacturer something of a pioneer, and also providing a major boost to the state’s industry.

Since production began in 1997 with the launch of the M-Class series, there have been several significant expansions of the plant, demonstrating the company's commitment to the site. The first took place in 2005 when R-Class production began. Other key milestones have included the manufacture of the one millionth M-Class in 2009 and the two millionth vehicle in 2014. Then, in 2012, production of M-Class and GL vehicle assembly kits began. These are shipped to India, Thailand and Indonesia for final assembly and sale in the local markets. Tuscaloosa has been the traditional production location for the R-Class and the GL SUVs, with the latter launching in 2006, while the C-Class sedan was introduced in 2014 and the new GLE Coupe model arrived in 2015.

Heavy investments have been required for these expansions. In 2011, parent company Daimler announced the decision to invest more than $2 billion between 2010 and 2014, with plans to create 1,400 jobs. Since 1993, more than $4 billion has been invested in the plant.

According to Jason Hoff, president and CEO of Mercedes-Benz US International (MBUSI), with responsibility for the Tuscaloosa plant, there are three key factors behind the OEM’s success at this location. The first, Hoff says, is a strong partnership with the state of Alabama, the second is the plant's integration within the Mercedes-Benz global production network and the third is its workforce. “One of the aspects which has cemented our success has been a flat leadership structure, meaning that more employees have direct access to management,” explains Hoff. “Our workforce is extremely motivated and very skilled, and the flat hierarchy helps with knowledge and skill sharing across the plant.”

C-Class production began in Bremen and in June 2014 it was rolled out to Tuscaloosa, now one of four international locations
Introducing the C-Class
Tuscaloosa remains a flagship plant for Mercedes-Benz to this day, especially as it has begun production on two important new vehicles in the last couple of years. In June 2014, it became one of only four Mercedes-Benz locations in the world to manufacture the C-Class sedan, the launch plant being Bremen in Germany. This is the first time a German luxury vehicle-maker has built a sedan in the US, although the C-Class has been available in the market since August 2014. As a result of this decision, the company has invested $350m and added around 1,000 personnel to its workforce.

“The decision to build the C-Class sedan here actually goes back to 2009,” says Hoff. “The thinking then was that we wanted to manufacture closer to the market we serve in a more efficient and flexible way. Hence we needed a plant in the US to serve significant demand in the country. This decision enables us to lower logistics costs and protect against exchange-rate fluctuations.”

He continues: This is part of our strategy as a company to expand the local production capacities in the country, as the US represents a massive market for Mercedes-Benz. The C-Class is setting new standards in our biggest sales market and is of great importance to the Alabama plant.”

Since global production of the C-Class is controlled by Bremen, around 100 workers from Tuscaloosa joined employees from other sites in undertaking intensive training in Germany to gain the expertise needed to build the sedans. Courses took place at the pilot plant in Sindelfingen near Stuttgart, at the training centre in Bremen and onsite at the original production line. “Many of our employees spent a significant amount of time in Germany getting to know the C-Class sedan, as well as associated technologies,” says Hoff.

Bremen also shared its tooling strategy with Tuscaloosa, plus learnings from an analysis of work steps aimed at improving conditions for the production staff. The German plant has also cut the amount of energy consumed per vehicle by more than 30%, in part due to enhancing the building engineering and the paint technology.

Of course, the plant itself also underwent changes to prepare for the start of C-Class production. “We carried out heavy refurbishment of our existing assembly shop to accommodate the new vehicles,” states Hoff. “This was because the technology used in the production of the C-Class is very advanced, so we had to retool the production line and train our employees to use this sophisticated technology.”

The material mix has changed since the last model, with the latest one using 50% more forged aluminium; the joining technology for the different body parts is also new to the plant, as it has not been done before with the SUVs manufactured on site. This includes processes such as laser welding, glueing, and riveting. “That’s where we saw the biggest changes from the SUV tech standpoint,” says Hoff. “In terms of assembly changes and improvements, we opened a new technology centre for attaching the roof and a high-precision facility for measuring gaps.”

“Growing from producing one model in 1997 to five high-quality vehicles today is a great achievement for us in the Tuscaloosa plant, and one of which we are very proud” – Jason Hoff, MBUSI

This introduction of the C-Class to Alabama looks like a good move. According to Mercedes-Benz, sales of the sedan are up 60% since the beginning of 2015, with more than 214,000 sold worldwide. In the US, the company had a record-setting June, as sales grew 6% from a year ago to 28,044. One of the sales leaders was the C-Class, alongside the M-Class and E-Class.

The season for SUVs
Tuscaloosa has also played a key part in what has been called “the year of the SUV” by Mercedes-Benz. In April 2015, the manufacturer started production of the GLE Coupe, which is designed to combine the attributes of a coupe with the versatility and robustness of an SUV. “The decision to manufacture the GLE Coupe here in Tuscaloosa was an obvious fit because we already had an existing platform for building SUVs,” explains Hoff. “The assembly capacity needed for this vehicle has been integrated into our existing SUV assembly shop. In terms of the paintshop, we use the same one for the GLE as for the C-Class.

“We have, however, opening a new dedicated training centre, as well as converting an existing building into a training centre. We also added a logistics centre in 2014, not specifically for the GLE, but to help accommodate general plant growth.” 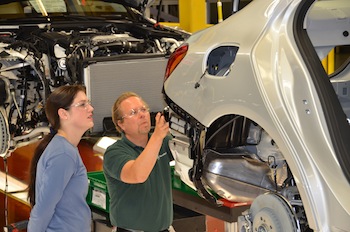 Around 100 workers from Tuscaloosa went to Bremen to learn production techniques for the C-Class
As production of the GLE Coupe is taking up a significant portion of the plant’s resources and there is ongoing strong demand for SUVs, R-Class vehicles are now being made at contract manufacturer AM-General in Mishawaka, Indiana. “This will gradually free production capacities to be used for the SUV series and will add a degree of flexibility to the site’s organisation, while improving efficiency,” explains Hoff.

The workforce at Tuscaloosa will also be overhauling the M-Class and the GL-Class SUVs which have been manufactured at the plant since their launch. These models will then be renamed the GLE-Class and GLS-Class, respectively. This is part of Mercedes-Benz’s overall strategy to grow its global production network and expand its SUV capacity in the US. According to Hoff, the focus for the foreseeable future is the C-Class and the GLE Coupe, as well as stabilising current operations. “Growing from producing one model in 1997 to five high-quality vehicles today is a great achievement for us in the Tuscaloosa plant, and one of which we are very proud.”