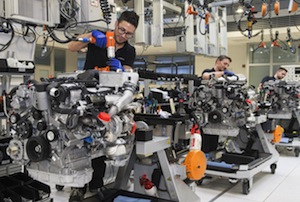 Germany – Assembly of the V12 bi-turbo engines will take place at a new location within Daimler’s manufacturing complex from February 2016. The employees in Affalterbach who currently assemble these products will switch to the eight-cylinder lines.

Tobias Moers, chairman of the board of management at Mercedes-AMG, explained the decision by saying the production capacities at Affalterbach are “fully utilised” with no possibility of expansion “at present”. In parallel, V8 production at Affalterbach will be expanded after a renovation including the establishment of a separate assembly line.

In the new operation, Mercedes-AMG will adhere to its policy of “one man, one engine” which is already employed at Affalterbach as well as the MDC Power facility in Kölledal; the Mannheim workers who will assemble the V12 engines have already recieved several weeks of training in Affalterbach. The OEM says the layout and logistics at the new location will be adjusted accordingly.

The 12-cylinder engines – which power the high-performance Mercedes-AMG S65, S65 Coupe, G65 and SL 65 models – will continue to be developed at Affalterbach.