The measure of success

Ford used a Zeiss CMM system installed for a machine-tool builder serving one of its plants
Back in 2013, Ford Motor Company began a project aimed at global standardisation of probe tooling for measurement systems in their powertrain operations. The company has been using Zeiss coordinate measuring machines (CMMs) and probes for over ten years, but probe tooling for each measurement task was being developed locally for individual plants, leading to variations in design from location to location. Engineers at each facility were “creating probe tooling configurations to meet their manufacturing needs,” says Ford gauging engineer James O’Kroy. While their configurations performed flawlessly, valuable engineering time, money and resources were being duplicated.

“Plants were measuring the same blocks, heads and transmission cases at multiple sites,” says O’Kroy. “Standardising on the same, consistent probe tooling and materials for all sites gave us the ability to have uniform reporting on accuracy and repeatability. Every location followed the same measuring process and used consistent scanning speeds to enhance throughput for the entire operation.”

“We knew that using Zeiss probe tooling would require additional investment, but saw potential for substantial savings of time and money both in common configuration and in ongoing measurement. The only way to confirm that idea was to test the Zeiss ThermoFit PRO modules. We couldn’t afford to allot time for testing on the Zeiss CMMs in a plant since they are in pretty much full-time use. Instead, we used a Zeiss CMM system we had installed for a machine-tool builder serving one of our Ford plants.”

Testers used Zeiss Stylus System Creator (SSC) software to develop a configuration of Zeiss components for an application for which engineering had already developed an existing component configuration. SSC allows virtual creation and testing of probe tooling, using the full range of existing and customised ThermoFit components and allowing direct ordering of the necessary components. Once a configuration had been developed, the software could store it for shared and future use. This eliminates the need to redevelop the same configuration at each site. 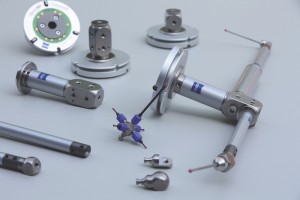 Zeiss ThermoFit probe tooling was built up and run 25 times in testing both accuracy and repeatability
Passing the test
Once developed using SSC, the Zeiss probe tooling was built up and run 25 times to test both accuracy and repeatability. The same set of tests was then repeated using the existing modules. In both sets of tests, the scanning speed and temperature range were the same. “In the past, we changed the scanning speed to achieve the accuracy we needed. For the test, we ran both sets at the higher speed we wanted to be able to maintain,” says Ford gauging technical specialist Srini Varre. “The Zeiss configuration provided better performance overall. The difference wasn’t dramatic, but it didn’t have to be. Today’s fuel economy standards require tighter tolerances in drivetrain components than ever before, and a couple tenths of a micron can make a difference in the performance of engine components.”

“In the long run, the multiple, locally developed probe tooling configurations were costing us money in reduced productivity,” says O’Kroy. “The Zeiss modules gave us the accuracy we wanted without having to sacrifice speed, and that was just the modules themselves. Using Stylus System Creator had advantages of its own. The system simplifies the whole process of configuring probe tooling. We can create virtual configurations entirely offline without tying up equipment or having to produce CAD [computer-aided design] models. It allows us to do everything we could do with a live system, including making sure that the configuration meets specs, that there will be no crashes, and that the tools and fixtures won’t interfere with one another. And we know that all of our locations will be using the same configuration.”

Modular system
SSC has a library of over 1,200 components including styli, extensions, and connectors. It also includes semi-finished angle blocks that can be modified in software and finished to the desired angles by Zeiss or by the customer. The modular system lets complex stylus configurations be designed quickly without CAD expertise. Completed designs can be made available to multiple sites, guaranteeing consistency; stored for future use; and assembled from standardised parts. And when changes are needed, the existing configurations can be quickly and easily modified. 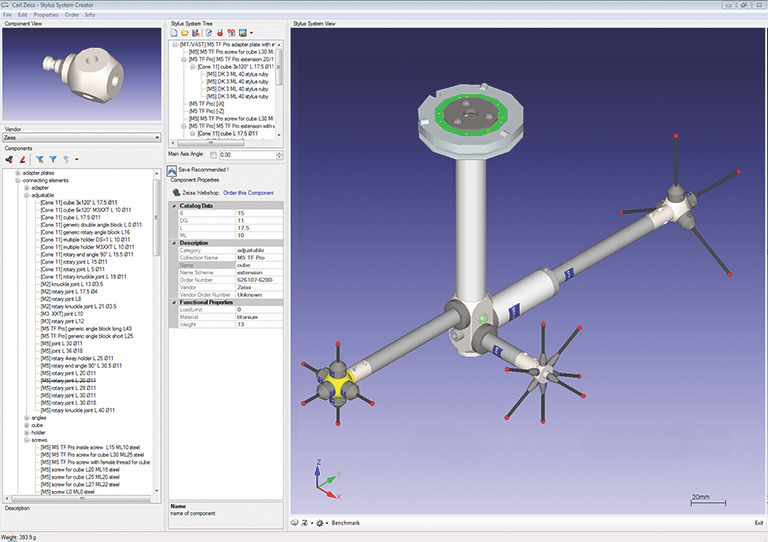 Receptive to requirements
ThermoFit components are designed for durability and thermal stability and use plug-in connections in place of threads, eliminating play and ensuring accurate, positive positioning of components. Configurations are built precisely to the SCC design and nothing changes when swapping out worn individual styli or entire branches of a configuration.

“We’ve mostly completed roll-out of the new standards to all of our plants,” says O’Kroy. “Zeiss has always been receptive to our requirements, and they have been particularly helpful in this implementation. Moving to the same probe tooling configurations at multiple locations has been a real benefit. We can turn to Zeiss for a common resolution of any issues related to measurement. We expect a lot more consistency among plants and a significant boost in throughput.

Configurations will only have to be developed once, and individual plants will be able to buy components to build those configurations directly from the Zeiss website. And when we do inventory components, standardisation will mean we need to keep a lot fewer in stock. We’ll get the performance we expect, better throughput, savings on development, and fewer problems overall.”