The German carmaker is introducing new models, including the C-Class sedan, to its Alabama plant 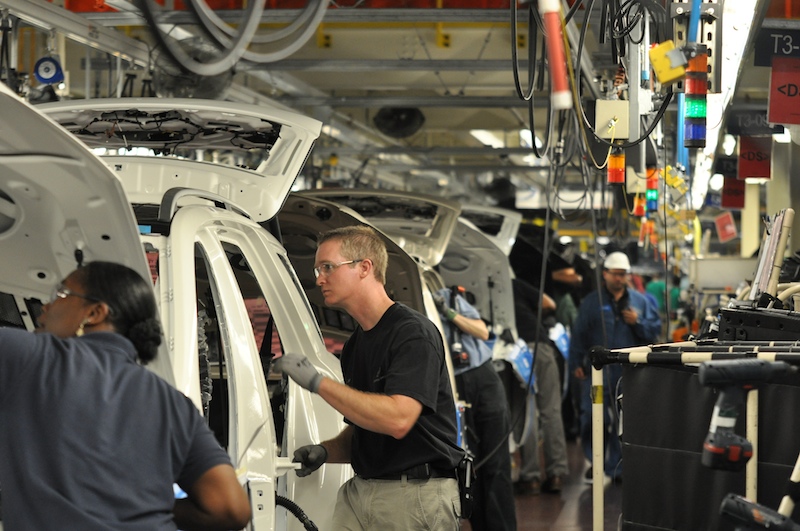 If you visit the Tuscaloosa County, Alabama, tourist board site, amongst the half-a-dozen local attractions listed is the Mercedes Benz Factory Tour at the German automaker’s Vance facility. When it was first opened in 1997 the $300m site was scheduled to produce 65,000 M-Class SUVs a year for the global market. But demand, particularly in the US, was stronger than expected and just two years after it opened another $80m was invested to increase that capacity to 80,000.

But with the R-Class Crossover Sports Tourer and GL-Class SUV scheduled to be produced there from 2000, another $600m expansion took place that doubled the size, capacity and workforce of the site. Last year, production volume was approximately 180,000 vehicles (M-R-GL Class) using flexible manufacturing technology. The first plant was approximately 1.2 million sq.ft – it now consists of two plants totalling over 3.7 million sq.ft (350,700 sq.m).
In 2011, Mercedes announced that it would begin production of the C-Class sedan in Alabama, along with a fifth vehicle yet to be announced.

The C-Class was a complete step change for the facility. “The C-Class sedan is a totally different vehicle to the three original models manufactured at the plant, particularly when it comes to materials used and internal assembly,” says Jason Hoff, president and CEO of MBUSI. “This provided some challenges and changes in manufacturing philosophy. The new materials and joining technologies did present some challenges for us.”

Investing in training
To prepare for the launch of the C-Class, pilot team members in body production, maintenance, and engineering spent months on product and technical training at the Mercedes-Benz plants in Bremen and Sindelfingen (Germany), and East London (South Africa). “This training has been a significant part of the readiness preparation for building the C-Class, along with the new, complex technologies and skills required to build it,” Hoff explains.

“Building the C-Class requires new materials such as steel sheet metal, high-strength steel (HSS), aluminium sheet metal, die-cast aluminium and extruded aluminium. It will be held together by a combination of spot welds, adhesive, laser seams, laser welds, MIG welds, rivets, impact nails, flow drill screws, and clinching joints. Most of these joining technologies are new to MBUSI and some new to Daimler AG.” The fact that the facility in Bremen has been producing the C-Class for some time is a big advantage. “The two sites definitely mirror one another as production processes for both plants were planned at the same time.

The C-Class will bring new materials and joining methods to the Mercedes-Benz plant in Tuscaloosa
“Since we got the green light back in December 2009, we began planning alongside our colleagues in Germany. We have some team members who have been working on this project anywhere from two to three years, or even longer. And we’ve had team members who have spent a tremendous amount of time travelling back and forth to Germany."

According to Hoff, some team members spent up to ten weeks at a time in Germany, observing and learning how to build the C-Class in order to bring the knowledge back and help in training others. In total, more than 2,000 man-weeks have been spent in Germany to acquire the technical skills necessary for C-Class production.

“Over the years, we’ve worked hand-in-hand with colleagues in Germany to accomplish our goals. Today, MBUSI team members – many of them native Alabamians – are now supporting and leading other plants with training as they launch their own operations. We are deeply integrated with our colleagues in Germany and the C-Class production network. We benefit from all global processes, including quality, production and investment planning, procurement and global framework. At the same time, our plant has the individual responsibility for carrying out our production plan, managing local suppliers, as well as hiring and training the 1,000 team members who will join the organisation to build the C-Class and other products.”“This training has been a significant part of the readiness preparation for building the C-Class, along with the new, complex technologies and skills required to build it”
– Jason Hoff, president & CEO, MBUSI

“We are in the midst of production trials right now and we plan to build the first customer-ready vehicle in late spring 2014. MBUSI conducts production trials to validate our process capacity to build our vehicles – we build test vehicles to make sure our people, our methods and standards are in place to build a vehicle the same way every time.”

Production operations
All the operations at Vance take place under a single roof. There is one bodyshop with various sections to build the M-Class and GL-Class in one area; R-Class in a different area; and C-Class in its own space. The plant operates a single paintshop for all vehicles. When it comes to assembly, the operation splits into two. Assembly 1 houses the new C-Class; Assembly 2 is home to SUVs. “We closed Assembly 1 about 18 months ago to allow a complete refurbishment of that shop,” Hoff says. “Since the C-Class is a completely different platform, and we have thus far only built sports utility vehicles, Assembly 1 needed a significant overhaul.

Even though the M-Class and the R-Class are on different platforms, they are all Unibody design. In the first station a barcode label is printed and attached to the engine compartment that has all of the production information including the vehicle VIN number. Then the body sections come together in a marriage station where the ‘PLUS’ Computer System reads the barcode and instructs the robots, including which VIN number to scribe on the rear floor. Every vehicle produced is for a specific order. Once the robots have placed the parts into the framing station, the precision welds marry the underbody components together.

“Because of the increased technology in our product today and the complexity of the new products, there is more automation in our plants,” Hoff says. “We now have approximately 1,300 robots in the plant, of those approximately 1,150 are in the bodyshop compared to the 60 robots in the previous bodyshop, which helps ensure repeatability and consistency.”

After traversing the paintshop, the bodies are placed in a defined order. This sequencing of bodies corresponds to the just-in-time-in-sequence production. The control department will send the selectivity bank a signal for a car to travel to the assembly shop. Typically, a simultaneous signal goes to the JIT/JIS suppliers to build the parts for that vehicle. The parts will arrive on the line at the same time as the body arrives. It takes 135 minutes to travel from selectivity bank to assembly. The assembly shop has six trim lines, four final lines, door line, engine and chassis line, off-line quality testing, as well as a repair area. The lines run east and west and the vehicles face the same way for the majority of the time.

All these operations are obviously energy hungry. The energy required at full production is approximately 42m watts (roughly the same as 8,400 typical homes). At Vance this is supplied by the Energy Centre which is located between the two plants. It works around the clock in three shifts to make sure that all the electricity, natural gas, compressed air and various waters used in the manufacturing process are available. 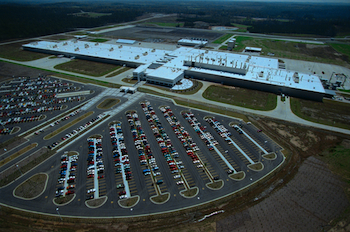 The Tuscaloosa facility now covers more than 4m sq.ft
Keeping logistics close
The JIT methodology is assisted by the new logistics centre. In the assembly shop, the target is to have only two hours’ worth of inventory stocked, which rises to three hours in the bodyshop, at any given time for the production line. When additional inventory is needed, the automated system places an order for replenishment and it is delivered almost immediately.

Some of the changes at Alabama involved new logistics planning. In January, the Tuscaloosa plant officially launched its new $70m logistics centre that will allow MBUSI to streamline its logistics operations and process nearly 2.9m vehicle parts per day. Officially named the Mercedes-Benz Logistics Centre, the facility is 915,000 sq.ft, about the same size as the Assembly 2 operations. This additional floorspace puts the Tuscaloosa plant at a little more than 4m sq.ft.

“Nearly 600 people will work at the logistics centre, including MBUSI team members, contractors and service providers,” Hoff adds. “MBUSI anticipates the centre will see about 240 inbound trucks daily moving nearly 20,000 bins per day and, as an added benefit, better facilitate the flow of truck traffic into the plant.

“Parts from the centre will move through a tunnel connected to the existing plant. We are also exploring many logistics concepts as a result of our increased volumes, including unmanned transport vehicles. The logistics centre will include 11 miles of racking, which will allow Mercedes to stack higher and use space more efficiently, and 378 parking spaces for office staff and 400 for trucks.”

A giant step
The set-up at Tuscaloosa today is a far cry from the modest 65,000-cars-a-year facility that was first envisaged. “We are extremely proud of what we’ve been able to accomplish here since the announcement was made some 20 years ago that a Mercedes-Benz plant would be established here in North America,” explains Hoff. “We’re in the middle of a big growth period – not only in terms of production volume, but also in employment and the size of our plant.

“Twenty years ago, I don’t think any of us could have imagined that MBUSI would achieve the level of success that it has – in terms of the major capital investment and the significant impact on our community. Equally important is the way this plant has changed the lives of so many people, including the lives of our team members. Their dedication and commitment to MBUSI has made us successful during our 20 years of operations, and I appreciate their focus on doing what we do best: building great vehicles and working together as a team.”