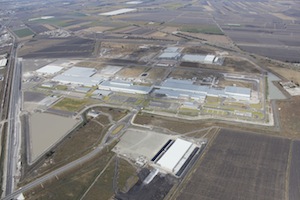 Mexico – The first vehicle which rolled off the line at Mazda de Mexico Vehicle Operation (MMVO) was a Mazda3 sedan for the US market.

Keishi Egawa, president and CEO of MMVO as well as Mazda’s managing executive responsible for the New Emerging Market Operation (Latin America), commented: “With the start of mass production, we now have a system capable of offering vehicles of the same high quality as those made in Japan, on a global scale.” He added that MMVO has sent 150 engineers and supervisors to Mazda’s plants in Hiroshima and Hofu, Japan.

MMVO will produce the Mazda3 for the Americas and Europe; its line-up will eventually be expanded to the Mazda2.