Designed in 1967 Covestro’s (then Bayer) K67 showcased how plastics could be used to create a stylish performance car. Fifty years later specialist materials supplier opened the doors at its R&D facility in Leverkusen, Germany, to offer an insight into latest material developments in plastics.

Dr Eckhard Wenz explained the particular strengths of polycarbonate in component and structures for current and future cars: “Polycarbonate is the only engineering, thermoplastic material that combines the clarity in transparency with the ingredients needed to produce a plastic part for automotive [applications] that has the impact strength and that will remain durable over time and temperature.”

“We are working on vehicle exterior projects that include lighting and glass substitution but we are also working on many aspects of the vehicle interior.”

Wenz noted that looking ahead, the car interior will be a big challenge, as it evolves inline with the changing needs of passengers in the next generation of driverless vehicles. He believed that the interior design would soon become as important as a distinguishing feature as the exterior design; in becoming more of a connected, living space than a driver/passenger seating area. [sam_ad id=17 codes='true']

Differentiating interiorHe cited the launch of the Opel Adam in 2013 as a turning point for the European market. This was an affordable mass produced car that was differentiated by the use of customisable interior and exterior trim. “Opel at that time had acknowledged that the success of premium cars over the last 10 years was very much due to the differentiated materials use inside,” Wenz noted.

To meet this requirement Covestro says it is offering the OEMs customised coloured solutions, even for low cost vehicles to add value and interest to the interiors. Wenz said that currently polycarbonate is being used in safety related applications as well as providing durable, attractive interior parts. However, future vehicles would utilise this material far more extensively to meet the aesthetic and practical requirements of new designs, according to Wenz. He offered the Renault Symbioz concept, with its multi-use cabin, as a good example of how vehicle interiors will transition from driving spaces into living spaces.

“The advent of level 4 [fully] autonomous vehicles will change the car’s interior dramatically and we have been preparing for this.” Wenz noted a concept interior design produced by Covestro in 2014 and how being involved at the pre-design stage, working with designers to identify future requirements and challenges, had paid-off in being in a position to offer new material surfaces for the current generation of cars. An example of this has been the creation of ‘true surfaces’; these are polycarbonate parts with a non-plastic surface appearance, metal or wood for example. Going further, by using selective electroplating to apply the surface finish the parts can also be illuminated, offering the same type of user experience as that provided by the latest smart phones; so for example use on car infotainment systems or interior ambient lighting. 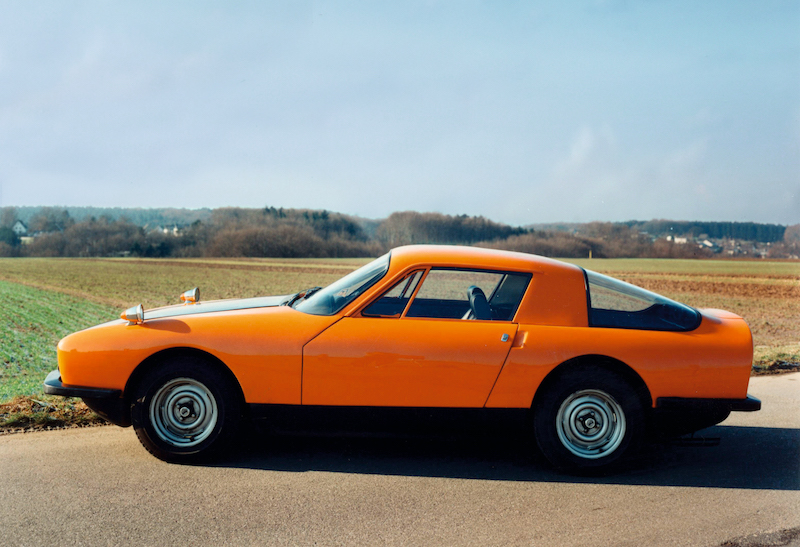 Designed in 1967, the K67 showcased how plastics could be used to create a stylish performance car

Seamless functionalityAccording to Wenz this type of functionality is in high demand from OEMs for their future autonomous models; the cross over vehicle interiors being designed around the integration of smart devices. One of the advantages cited was how using these coatings on engineered polycarbonate can provide this type of seamless interior, which has the functionality of system controls integrated into the trim without dials, knobs and switches, just having certain functions illuminated as required.

Asked if polycarbonate was now a viable alternative to automotive glass, Wenz noted that polycarbonate has been used in the sunroof of the Smart Car for the last 10 years, however, development hadn’t been focussed on trying to duplicate the properties of glass but instead to delivery greater functionality as the requirements for new vehicles change, for instance in forming complex 3D shapes and in transparent parts becoming information delivery areas.

In terms of the polycarbonate development approach Wenz explained: “We [Covestro] are approaching the solutions from two different directions; from the resin technology side and the polycarbonate film technology. We are bringing these developments together with some electronic specialists to jointly develop capacitive switches.” From these explanations it’s easy to see a convergence of automotive and consumer electronics being to some extent enabled by the development of new materials.