Made to master the colour matching challenge 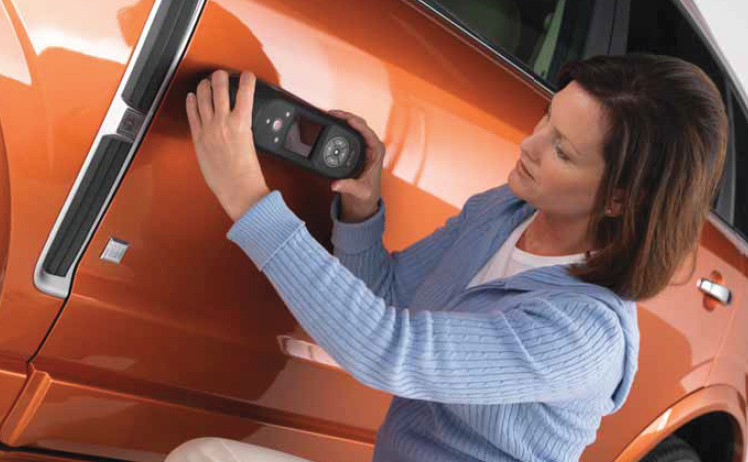 A major European automaker experienced difficulties on its production line when body panels painted at the factory using a popular silver metallic colour suddenly didn’t appear to match the bumper fascia supplied by an outside vendor.

While there had been occasional small problems before that could be assigned to definite root causes, this time the differences in colour and appearance where the body panels appeared darker than the bumper fascia was readily noticeable.

Paint formulation or application variation?
Process engineers at the automaker applied traditional root cause analysis to the problem, first trying to identify whether the matching problem was internal process, changes in formulations by the paint supplier or parts that were out of specification from the bumper supplier. Individuals working on the line told the engineers of a sudden difference in how the parts matched, and their floor inspectors using an X-Rite MA68II multi-angle spectrophotometer said the instrument indicated there was a difference in its reflectance values. With the available data, the engineers reasoned that the root cause of the problem was due to paint formulation, and they asked for assistance from the paint supplier. When the studies showed that the MA68II was functioning correctly and measurement techniques were applied properly, X-Rite personnel offered to analyze the paints with the MA98, the most advanced version of the company's MA family of spectrophotometers. X-Rite technicians were allowed to use the MA98 to not only corroborate data, but also to see whether the root cause of the problem could be determined instrumentally.

Differences in colour – and opinion
The MA68II showed reliably and repeatedly that the colour differences in the L* values — the values that refer to how light or dark a colour appears — at near specular angles were higher on the bumper fascias, but it couldn’t provide much more information other than the fact they didn’t match the body panels. 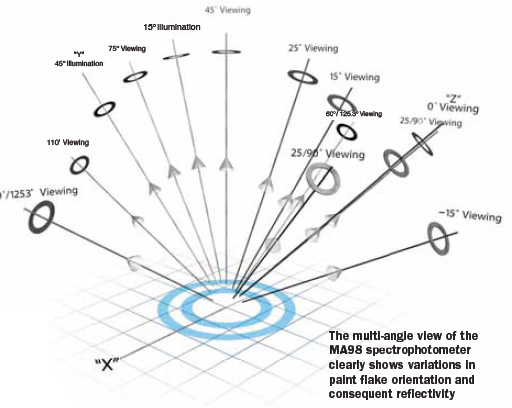 Since the MA98 takes measurements with two illuminations and up to 19 angles, instead of only one illumination measuring at 5 angles, the instrument can record relative comparisons of the critical aspects of special effect paints, such as interference and full visual appearance. The colour change of such effect finishes vary not only by changing the observers viewing angle, but also by changing the illumination angle. The MA98 is the only portable instrument in the market to fully characterize such samples. The data indicated major variations at the +/-25° out-ofplane angles, which can be caused by differences in flake orientation. It all pointed to a mismatch or harmony problem due to processing differences between the bumper fascia and the car body.

Process change brought disharmony
The carmaker then realized that it had altered a critical process parameter in prior months when it changed from a bell/air method of applying the base coat and final coat to body panels to entirely bell/bell method. The type of silver paint it was applying contained relatively low pigmentation and a relatively high reflective value due to the higher percentage of flakes in the paint medium.

Using bell/air, the flakes of the paint essentially had an opportunity to float in the paint medium and come to rest horizontally on the body panel in a random distribution. That orientation maximizes the reflective characteristic of the flakes, giving the paint a lighter appearance Prior to the process change body panels and bumper fas the bumper supplier used an allowed the flakes to align th way similar to the carmaker’s method. But when the carmaker implemented the bell/bell method, the process delivere the flakes so they were orient on their edges uniformly, cutting their reflective qualit to give the paint a darker appearance.

This phenomenon is understood by paint engineers, but the information wasn’t considered during the process change until the MA98 brought the differences to light. With the data measured by the MA98 and interpreted mathematically in only two days by X-Rite personnel, the automaker made adjustments to the paint supply speed in the bell-bell system and coordinated with the bumper supplier to achieve harmonious colour matching in body panels and bumper fascia. Tools like the MA98 are a way for automakers and their suppliers to closely monitor their processes and possibly save hundreds of manhours during root cause analysis of problems.