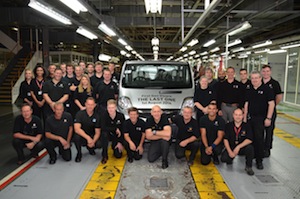 UK – Unit number 957,107 made at the Luton plant will be housed in the Heritage Centre at Vauxhall’s nearby Griffin House headquarters. Of the nearly 1m Vivaros built since 2001, 44,000 were made in 2013. Over half the production has been exported to European markets.

Having secured a £185m contract, Vauxhall Luton will start making the new Vivaro later in August, on a ten-year contract and operating two shifts; a second shift will be added in January, requiring an extra 250 personnel on top of the 1,200 staff at present.

“The Vivaro van is of critical importance to Vauxhall and its manufacturing facility in Luton,” said Tim Tozer, Vauxhall’s chairman and managing director. “I’m very proud of the men and women who build this vehicle to world-class levels of quality and productivity.”