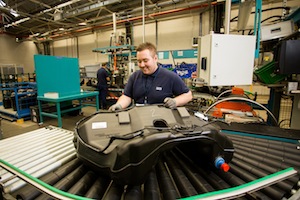 UK – The 7,500 sq. m facility is the company’s second new site in the area and is intended to handle demand for increasing volumes of its products. Around 45 of the existing 300-strong workforce in Canley will move to the new leased premises.

Pound added that £6m has been invested in next-generation blow mould technology. “This will enable components such as valves and fuel lines to be placed inside fuel tanks more effectively, ultimately providing reduced vehicle static fuel emissions,” he said.