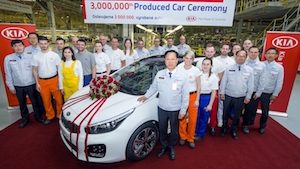 Slovakia - The OEM has recently made its three millionth car in Europe since starting production at its Žilina plant in Slovakia during 2006. This follows shortly after Kia recorded its best ever sales figures across the continent.

The Žilina plant currently houses production of the cee'd, Sportage and Venga, as well as several engine variants. These are then exported to over 80 countries around the world, as well as being sold in the local market.

Kia sold 472,125 cars in Europe last year, marking a year-on-year increase of 8.5%. The Sportage was its best selling model, while sales of the Rio and Picanto grew by 6% and 14.3% respectively.

More:Putting the Kia in Slovakia