JLR’s next plant to be built at Nitra 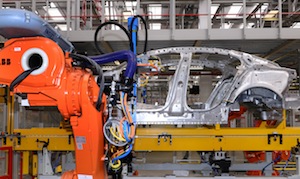 Slovakia – The OEM has signed a letter of intent with the government for the development of its production facility in the west of the country. The move is part of Jaguar Land Rover’s (JLR) strategy to become a more competitive global business by expanding to new international locations.

A joint feasibility study with the Slovakian Government is now underway to explore plans for a factory with capacity of up to 300,000 vehicles over the next decade, including aluminium models, and a production launch in 2018. “With its established premium automotive industry, Slovakia is an attractive potential development opportunity for us,” said Ralf Speth, CEO at JLR. “The new factory will complement our existing facilities in the UK, China, India and the one under construction in Brazil.” Nitra was chosen after “robust analysis” of several locations in Europe, the US and Mexico, according to the OEM. The final decision is due later this year.

In announcing its plans for Nitra, JLR emphasised that the UK remains the “cornerstone” of its operations, as the centre of its design, engineering and manufacturing capabilities. Over the past five years, the carmaker has invested more than £11 billion ($17.1 billion) there in product development and capital expenditure; employed 20,000 people to boost its workforce to around 36,000; upgraded its plants at Castle Bromwich, Halewood and Solihull for vehicle launches; and invested more than £500m in a new Engine Manufacturing Centre at Wolverhampton. JLR also plans to invest further in its engineering and design centre at Whitley, and the National Automotive Innovation Centre at the University of Warwick.

“The expansion of our business globally is essential to support its long-term, resilient growth,” stated Speth. “As well as creating additional capacity, it allows us to invest in the development of more new vehicles and technologies, which supports jobs in the UK.”