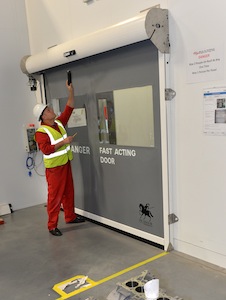 UK – The Leeds-based company supplied more than 40 high-speed doors for the OEM’s £500m facility in Wolverhampton, which opened earlier this year. A combination of variously sized Ramdoors, Bulldoors, Matadoors and Picadoors were installed.

All the doors are activated by radar motion sensors for fully automated operation, plus active infrared sensors (AIR) to detect any presence in the immediate vicinity and ensure safety. The Matadoors, Bulldoor and Ramdoors also feature ‘crash-out’ damage protection which enables them to remain operable even if a vehicle hits the heavy-duty steel composite bottom beam.

For openings with highly variable air movements, Union installed Bulldoors and Ramdoors, two of the most durable doors in its range. The majority of the Ramdoors have been fitted with heavy-duty travelling windbar systems on both sides to give additional support to the door blade. Union says these were specified “early on in the design stages of the project”.

For the engine centre’s measurement room, which requires a constant temperature and humidity, Union provided its small, internal Picadoors. These minimise heat and moisture ingress by creating an airlock, in which only one door can open at once.

Alan Hirst, sales director at Union, said the JLR project was one of the door manufacturer’s largest in recent years and that it was “pleasing to see companies such as Jaguar Land Rover supporting other, smaller UK manufacturers”.