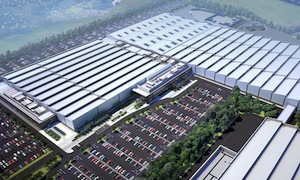 UK – A £450m ($678m) investment will increase the footprint of its Engine Manufacturing Centre (EMC) in Wolverhampton, which opened last year, to 200,000sq.m. The OEM said the greater capacity will support its “product offensive”.

The EMC was established to make Ingenium engines and is Jaguar Land Rover’s first in-house engine manufacturing operation in recent times. Over the past 12 months, the facility has progressed from prototyping to full-scale manufacture, turning out 50,000 engines. The EMC supplies all three of JLR’s UK plants with engines to power the Jaguar XE, the Range Rover Evoque and the Jaguar XF – soon to be joined by the Jaguar F-PACE.

The new investment will add several hundred jobs to the existing EMC workforce of 700, raising JLR’s global total to 40,000 by next year.

Overall, the OEM has invested £1 billion in the site, which it says is “the most significant new automotive manufacturing facility to be built in the UK in the last decade”. Ralf Speth, JLR’s CEO, described it as “a strategically significant facility for Jaguar Land Rover”.