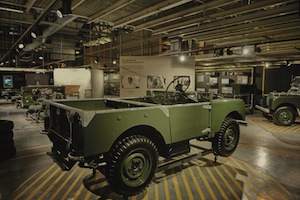 UK – The Defender Celebration Line at the Solihull plant, West Midlands, replicates the manufacturing set-up which produced the first Series I Land Rover shortly after the Second World War. Jaguar Land Rover is marking the final year of Defender production in the UK.

Located by the Defender production line which is housed inside one of the original manufacturing buildings, and still employs 450 workers, the Celebration Line showcases replica models in various build stages from bodyshop to final assembly. The vehicles have been made using the same parts and processes as the original Series I. Also on display are original tools, authentic overalls – or ‘cow gowns’ – and a draftsman’s drawing board. Video footage tells the story of the creation of Series I by Land Rover founder Maurice Wilks.

“It has been a huge task to recreate a production line from almost 70 years ago, from sourcing original parts for the Series I models, to authentically re-creating the working environment and uniform of employees who were here,” commented John Edwards, heritage director at Jaguar Land Rover.

Parts were provided by the curator of the Dunsfold Collection of historic Land Rovers, Phil Bashall, who had amassed 8,000 original pieces. After all the parts were sourced, the five models were assembled over the course of five weeks. Skilled craftsmen and members of the Land Rover Series I Club helped to build the replica chassis, plus some aluminium bodywork.

The Celebration Line is now open to the public.