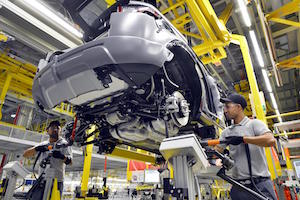 “Land Rover is already Brazil’s market-leader for mid-sized premium SUVs, accounting for more than 30% of all sales in that segment,” commented Wolfgang Stadler, executive director, Manufacturing, at JLR.

“The Range Rover Evoque and the Land Rover Discovery Sport will now be manufactured for the first time in Latin America, building on their existing popularity with customers in Brazil,” he continued.

According to JLR, the plant is “fully flexible” and equipped with “cutting-edge manufacturing technologies”. The building also includes sustainability features such as rainwater collection, which may help JLR to achieve its ambition of gaining Gold status for Leadership in Energy and Environmental Design (LEED). JLR says the factory already has the most advanced Emissions Conformity and Certification in South America.

At Itatiaia, JLR is sourcing major components from local suppliers such as Benteler and IAC, including the seats, cockpit, exhaust, chassis and powertrain assembly. The company has also invested in its technical assistance services to work with suppliers on increasing the level of localisation in future.

The Education Business Partnership, operated together with national training provider SENAI, will offer educational programmes for youngsters between the ages of five and 18 with the aim of inspiring the next generation of automotive engineers. The courses will focus on engineering, manufacturing and business activities.

JLR has had a presence in the Brazilian market for a quarter of a century and the country is now one of the OEM’s top 15 markets. Sales increased by 11% in the first five months of 2016, and the Range Rover Evoque, Range Rover Sport and Land Rover Discovery are top sellers. The opening of the new factory at Itatiaia follows a previous overseas expansion by JLR, when it established a joint-venture plant at Changshu, China, in 2014.