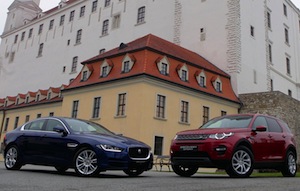 Slovakia – The OEM announced that it will become the first British carmaker to open a manufacturing facility in the country, after reaching an agreement with the Slovakian government. A letter of intent had been signed in August for the development of the production facility at Nitra, western Slovakia.

The £1 billion ($1.52 billion) plant will manufacture a range of new aluminium models, with the first due to roll off the production line in 2018. The factory, which will eventually employ around 2,800 people, will launch with a capacity of 150,000; construction work is due to begin in 2016.

“The new factory will complement our existing facilities in the UK, China, India and Brazil and marks the next step in the company’s strategy to become a truly global business,” said Ralf Speth, CEO of Jaguar Land Rover (JLR). The OEM has already launched a joint venture in China and started constructing a new factory in Brazil late last year.

“Slovakia has an established premium automotive sector, which represents 43% of the country’s overall industry,” continued Speth. “It has more than 300 suppliers in close proximity and an excellent logistics infrastructure; this confirmed our decision that this country was the ideal location.” Slovakia was selected above the US, Mexico and other European nations.

However, he emphasised that the “heart” of JLR “will always be in the UK”, its design, technology and manufacturing base. Over the past five years, the OEM has invested more than £11 billion in product creation and capital investment, including upgrades to its UK manufacturing facilities at Castle Bromwich, Halewood and Solihull.