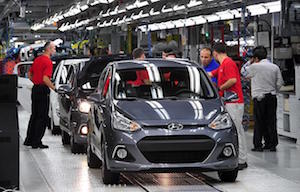 The EU may be facing political and economic uncertainty as it wrestles with the current immigration crisis and stock market turmoil, as well as economic doubts in China threatening the stability of a key export market for Europe. However, for some vehicle manufacturers, 2015 saw new production records – and 2016 promises even better news. In the UK, JLR’s production total climbed above 500,000 for the first time, which meant that it also outstripped Nissan UK for the first time. The relative newcomers to Europe, Hyundai and Kia, also set production records and anticipate even higher numbers this year.

Kia Slovakia produced 338,000 vehicles in 2015, of which nearly 199,000 were the Sportage model, making this the highest-volume SUV produced in Europe. Moreover, output is likely to increase again in the near future when a B-segment crossover is added to the factory’s portfolio. At its sister plant in the Czech Republic, Hyundai hit an even higher production record with over 342,000 units – including more than 203,000 of the old ix35 and its replacement, the Tucson – coming off the Nosovice assembly line.

With Turkish production topping 220,000 units (again a record) and Russian production reaching nearly 230,000 (not a record, but still the second-highest ever in the country for Hyundai), total European production for Hyundai-Kia was over 1.1m. Hyundai output in Russia has held up remarkably well despite the economic downturn in the country, and considering the new Hyundai and Kia models due in the next couple of years, plus the likelihood of either a new factory or a major extension in Turkey, production of 1.5m cars and SUVs in the region seems far from unreasonable. Hyundai’s Czech plant is projecting a 2.3% rise to 350,000 units in 2016, and given that 2015’s increase of 11% was nearly 4% above expectations, and that the popularity of SUVs continues to grow, it would not be surprising to see these initial projections exceeded.

Meanwhile, back in the UK, press reports have suggested that already there is a nine-month waiting list for the F-PACE SUV, while production of the Range Rover Sport continues to grow. Capacity at the new Solihull facilities may well be full much sooner than JLR’s planners expected, even in their most optimistic moments. The need to boost output at Castle Bromwich will assume greater priority, while the pressure to build the new plant in Slovakia will also only intensify if demand for JLR’s vehicles continues at current rates.

The OEM is certainly riding the sustained wave of premium vehicles across Europe; with low interest rates and attractive financing, it seems that the prevailing economic and political uncertainty has yet to hit premium-brand demand. It may do, but the signs are not there yet.

In the volume market, the pressures may well be different and more acute, but Hyundai-Kia has managed to tap into strong demand for compact SUVs and both brands have further crossover models planned. With their modern, logistically efficient plants, the Korean OEMs have better cost structures in place than the European volume players and seem very good bets for continued production growth and further investment in manufacturing facilities.