Fiat's CEO for the region talks of launching new models at Ranjangaon, including vehicles for FCA brands 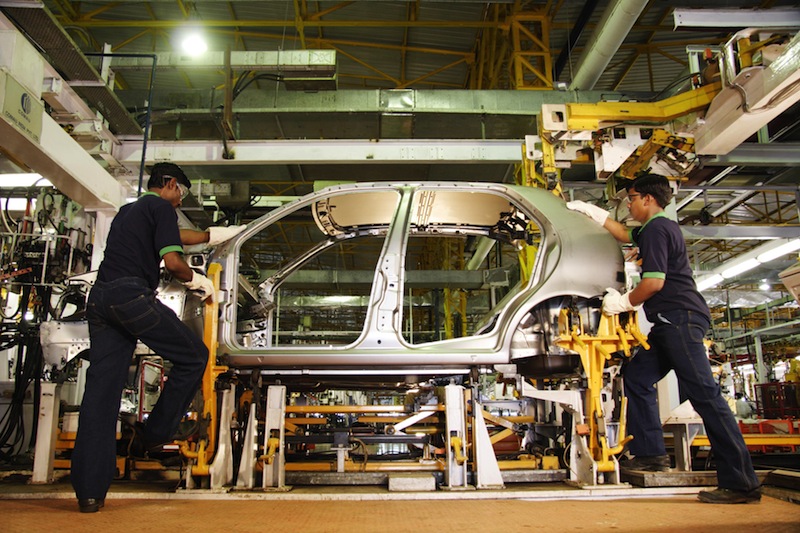 AMS: Start of production at Ranjangaon was in 2007. What was the installed capacity then, and has this increased?
Gurpratap Boparai (GB): It has remained the same at 130,000 units per annum, but if we include painted car bodies, which we also supply [to Tata], then that is an additional 30,000 units. This is based on demand. We have capacity to produce 350,000 engines and 300,000 transmissions per year.

AMS: How much of the vehicle production is for export?
GB: Currently this is a negligible amount but we will have some new products coming here that would be exported. The main reason is that the current range is perhaps getting old and traditionally Fiat has not been strong in the right-hand-drive markets and that’s what we produce here.

However, this is being corrected as Fiat has reorganised into regions and we fall under the Asia-Pacific region. There is now more focus on this region as Fiat has stated its aim to sell 7m cars – up from the current 4m – and much of the growth will come from this region. There may be some small increases in North America, and Europe will probably remain the same, so the biggest contribution to this growth will come from here.

AMS: What about the engine and transmission production; is any of this exported?
GB: Currently the completed units are for the domestic market, but we do export certain components that we machine here. We export these to China and Italy.

AMS: What impact will the formation of Fiat Chrysler Automobiles (FCA) have on Fiat India?
GB: It will mean that we will also be producing Jeeps in addition to Fiat cars. The management team here is a mixture of Fiat and Chrysler, so it’s truly FCA now.

• Boparai started his career with Tata Motors and moved to Tata Cummins in 1995
• He joined IVECO’s engine plant in Turin, Italy, in 2000 as head of logistics, head of engine assembly, engine test, paint & CKD operations
• He has been at Fiat India since 2001, having started as head of manufacturing for the powertrain division. Boparai helped to establish the state-of-the-art greenfield facility, which produces 350,000 engines and 300,000 transmissions per year. 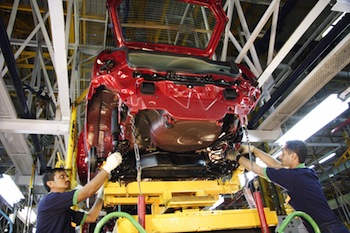 AMS: Which Jeep models will you make here?
GB: That has yet to be decided.

AMS: Will you need to make any major changes to the production lines to accommodate Jeeps?
GB: Yes, we will have to add another assembly line for the Jeeps. The existing lines will be taken up with other products and we will need to expand capacity. So as not to overcomplicate the existing lines, it makes sense to build another line.

AMS: What level of locally supplied content features in the vehicles produced here?
GB: We have a very high level of local content, around 90%. With the exception of Maruti Suzuki, this is probably one of the highest levels of local content used by an OEM in India. This is an average figure across our model range.

AMS: You don’t have a press shop here. Is this something you might add in the future?
GB: The pressed panels are supplied by an Indian/Italian joint venture company called JBM Magneto. Our strategy going forward is not to set up a press shop here.

AMS: Is there a reason for not wanting a press shop here?
GB: The quality of the parts currently supplied is good and to build a press shop here would take up space and require an investment we don’t want to make at this point. We would need to increase volumes to 240,000 vehicles per year to justify adding a press shop.

AMS: When you add the new models here, what will be your target output?
GB: This will be around 180,000 vehicle for Fiat Chrysler and potentially 65,000 for Tata, but they [Tata] are still reviewing their plans so this could increase.

AMS: Things look very positive for the future, but considering the problems within the Indian economy have you had to cut production in recent years?
GB: Yes, we reduced production last year while the Fiat network was being set up but Tata added more models to those produced here, so things have been reasonably stable. We currently produce three models for the Tata brand and there will be a fourth added, so we should be stable this year. The current economic situation isn’t ideal but we can’t allow this to dictate our future growth. Our plans are robust and Tata has a good portfolio of products and is renewing its range.

AMS: There seems to be a lot of optimism for the future growth of the automotive sector in India.
GB: Definitely. The vehicle penetration here is still very low, between 12-13 cars per 1,000 people and I don’t see this reaching the levels seen in Europe or the USA, but if we can reach 50-60 cars per 1,000 people that is a huge demand gap to be filled. It’s only a matter of time; this [economic slump] is a temporary setback.

AMS: The industry is seeing a lot of emphasis on flexible lines. How many models can you build on a line?
GB: We can produce up to five models on a single line, so we have the flexibility, but the downside is it adds complexity to your logistics and assembly operations. It becomes a challenge to maintain the consistency in quality unless the models are very similar, which isn’t the case here. We produce the Fiat bodies here but the Tata bodies are sent here for painting, so the sequencing is very complicated. 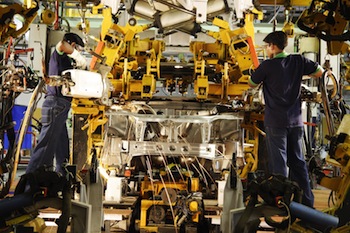 AMS: How much automation do you use here?
GB: We have about 60-70% on the engine and transmission lines and significantly less on the vehicle assembly lines. You always need a person on the line for certain tasks and automation can reduce flexibility in terms of handling multi-model lines and any large reduction in volume.

AMS: Do you see the need for increasing levels of automation to be used in vehicle production in India?
GB: Where it has a positive effect on quality and productivity then yes, but not all operations benefit and in many cases a person can achieve similar levels of productivity. A lot depends on where you build the cars; here we have relatively low labour costs and the government encourages employment. Also, if you have a high capital investment in equipment then it requires full utilisation to make it cost-effective.

AMS: How is the Fiat Chrysler World Class Manufacturing (WCM) programme being implemented here?
GB: This is an ongoing process where the standards are continually updated. The level of proficiency needed to achieve the Bronze standard three years ago now wouldn’t be sufficient; the bar is continually being raised. Our approach to the implementation of WCM is fundamentally different in that it is driven by prioritisation of costs, so you aim to capture all the losses you have in your facility and then deal with the top losses.

For example, looking at autonomous maintenance on equipment, WCM says to take all the breakdown losses and arrange them into those caused by lack of basic conditions. Then take the top three or four and attack those first, dealing with the machines causing the highest losses. Then you get the most return on savings and improvements in efficiency for the least amount of effort. So avoiding trying to deal with all the breakdowns, big or small, you initially focus on the most problematic.

AMS: Do you share improved practices and processes across the Fiat Chrysler manufacturing network?
GB: Yes, there is a global portal where all these projects are loaded and of these some are awarded Best Practice. You can then consider those Best Practice projects for application at your plant; some can be implemented immediately, others offer a guide to improvements. Visits to other sites are encouraged and we are leading on WCM in this region; our powertrain plant was the first to achieve the Bronze standard and our vehicle plant will achieve Bronze standard this year [2014].

Manufacturing operations at Ranjangaon
Powertrain
Ranjangaon has an impressive powertrain production facility that manufactures the 1.3-litre SDE diesel and 1.2-1.4-litre petrol, Fully Integrated Robotised Engines (FIRE), and transmissions. Production capacity is split between 100,000 petrol units and 250,000 diesel engines. Currently, production of the FIRE unit is at 90% utilisation, with the line operating three shifts. The demand for the diesel unit is much lower. A fully automated Comau machining line performs four operations on the FIRE cylinder heads and ten for the diesel components.

Skills & training
Assembly requires a number of manual operations and a high degree of accuracy; a great deal of emphasis goes into staff safety and training. Throughout the powertrain section, there are numerous training stations that function as information points, and areas where briefings and training sessions can be conducted. One interesting training tactic requires the operator to perform two identical tasks simultaneously with each hand, so as to develop the two-handed co-ordination required for certain assembly tasks. 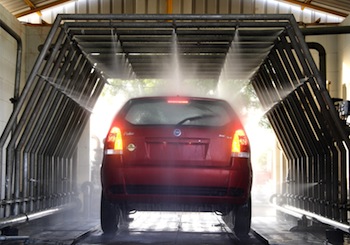 The WCM philosophy at Fiat Ranjangaon encourages workers to come up with simple yet effective solutions for greater efficiency
With a current throughput of 28jph, the 10,000 sq.m Geico paintshop operates over two floors, with the first being used for the majority of operations (cleaning, dipping, paint application, etc). This is mainly an automated operation, with 12 paint and two sealing robots supplied by ABB, but there are some manual sealing operations carried out by a dedicated team. In the past this sealing task caused a bottleneck, but a special training area has generated improvements.

The solution is surprisingly simple. Sample panels are set out with the same sealing equipment as used on the line. Operatives then practise the application of the sealant, which has to follow a predetermined path and delivery of the sealant. The team can thus perfect the operation before going on the line.

Continuous improvement is a major part of the WCM philosophy and staff at all levels are actively encouraged to analyse their areas of operation to identify where improvements can be made. The solutions which come from the lines are invariably simple and very effective, for example an adaptive baseplate for mounting different cylinder blocks that saves changeover time on the engine assembly line. Another clever idea has allowed the powertrain assembly line to make significant savings in the use of the sealant for the sumps. A simple modification to the delivery method has meant that the entire contents of the sealant container can be used; previously up to 20% was wasted.