OEMs face the challenge of assimilating a growing number of electric vehicles and assemblies into their production operations. Volkswagen and Renault have each taken the plunge with the e-up! and the Zoe 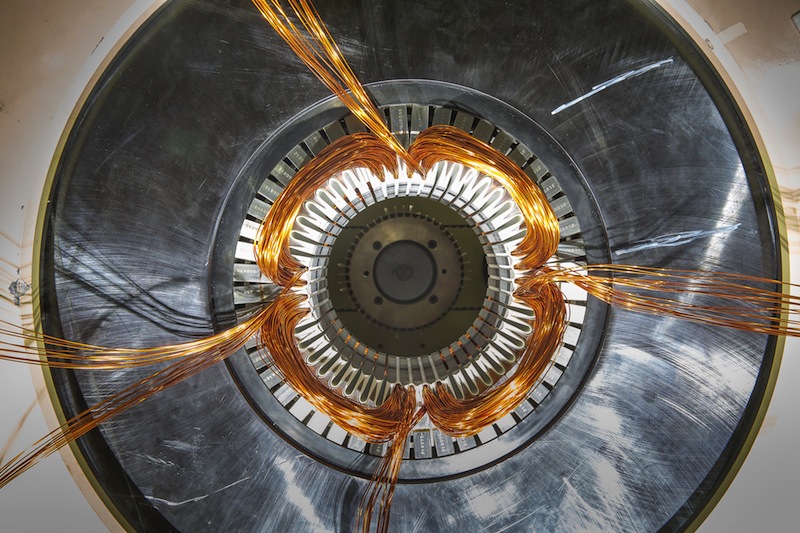 Five kilometres from the heart of the Slovakian capital, on the north bank of the Danube, is the Volkswagen Bratislava plant – home of the first VW model to have a completely electrical drive. The plant was inaugurated in 1991 and the following year it began mass production of the Passat Variant. Employing 9,400 staff, it is one of the largest employers in the Slovak Republic and the country’s biggest exporter. As well as the electric VW e-up! the plant makes the VW Touareg, Audi Q7, Skoda Citigo and Seat Mii, plus the Porsche Cayenne body.

Vladimír Viskup is head of chassis at the plant. It is in his department that workers install the electric motor and batteries which arrive from the plant in Brunswick, Lower Saxony. Viskup is proud to extol the virtues of his workforce and the manufacturing processes in what he describes as "the factory of the future". “For assembly of the e-up! we have trained extra employees,” he says. “In the hall you will see no forklifts. All the parts are brought to the line by a driverless transport system. Also, you will not see the usual car information cards. All instruction and input is handled electronically, via mini computers. This saves tons of paper”.

For the past two years, Albrecht Reimold has been chairman of Volkswagen Slovakia. Before that, he headed up the Audi plant in Neckarsulm, Germany. “We greatly appreciate the confidence shown by the board in our plant by the award of the e-up! to Bratislava,” he says. “While we are proud of this fact we also recognise that it is a challenge for us. However, it is not all new as we are helped by the fact that we have built the Touareg hybrid here since 2009 and so have more than four years' experience with electric drives.

“All the employees are very engaged, inquisitive and open-minded towards the new technology. Their skills and expertise are very important to us and we need to develop these. For example, we have trained more than 3,200 workers on high-voltage technology as part of the new programme.

VW Bratislava builds the OEM's first model with a completely electrical drive, which required additional workforce training
“Of course electric-vehicle technology is different than traditional automotive manufacturing technologies, therefore we have had to develop a great many training courses. But at the heart of everything is safety. The safety of our employees is the absolute priority: you should arrive at work healthy and go home healthy again.

“We ask a lot of our staff in the interests of our customers, but we also recognise performance. Management culture plays a big role in [our organisation]. For example, in a recent survey the satisfaction ratings of Volkswagen as an employer in Slovakia has risen again by 4%. That makes us very proud, as well as the fact that we had above-average participation in the survey.”

Fitting EVs into existing operations
Some car manufacturers are opting to keep the manufacture and assembly of EVs and their components separate, while others are integrating them into existing production flows. Falling firmly in the latter category is Renault, which launched the New Clio alongside the Zoe EV at the same time at its Flins facility, located just outside Paris. The production processes of the Zoe and New Clio body shells are so similar that it takes a carefully trained eye to spot the differences between the two, but the Zoe is designed exclusively for electric propulsion and is crammed with the most advanced electric technology. Despite this, its arrival in the plant did not call for as many adaptations to the production as might be expected.

“The arrival of an electric vehicle could have introduced a lot of changes, but we have managed to keep them to a strict minimum,” explains Didier Lehingue, deputy director of the plant. “That was the goal of the 20-person team tasked with the industrial development of Zoe.” David Garreau, senior quality manager for industrialisation of the Zoe, says the first 12 months were “fundamental to defining the basis and finding the optimal industrial organisation”. The aim was to find smart solutions, from the design phase through to the production methods, for adapting existing systems and keeping the initial outlay under control. For example, old-generation Acma or ABB robots were reused. After hours of meetings, forecasts and calculations, cost estimates and the development of the end-to-end process, the decisions were finally taken on the technologies and the layout. 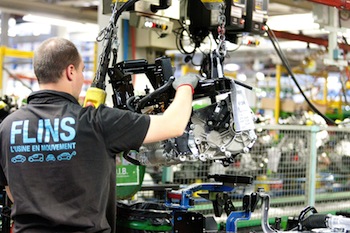 Renault Flins managed to integrate the electric Zoe alongside the New Clio with minimum changes to production
The arrival of the EV did prompt some larger adjustments in the stamping shop, which manufactures the opening panels (doors and tailgates). Production had to become sufficiently flexible to make the opening panels for four different models – the Zoe, New Clio, Clio Collection and New Clio RS – instead of just two previously, the Clio III and Clio III RS. The bodies-in-white of the RS versions are then shipped to Dieppe, where they are painted and assembled. An extra step has been added in assembly line for installation of the battery in the Zoe’s underbody. The production line can switch between the Clio Collection and New Clio without making any changes, so that the three models are manufactured on the same line in a fluid manner.

“We are breaking new ground by assembling the batteries directly at the production plant, in a 500 sq.m workshop set up from scratch and kept safely under wraps for eighteen months,” Garreau says. “Another tough challenge consisted [of] setting up an assembly line using manufacturing processes close to those found on lines producing mechanical subsystems, with operators working on fixed workstations, in a car plant where the operators work on the vehicles as they move along the assembly line.

“After lengthy discussions, a decision was finally reached on the battery assembly process. The operators work on the batteries at a standstill in order to guarantee build quality, but for a limited time only, in order to keep pace with the production flow of the vehicles. If they have not finished when their time is up, they can press a button to withhold the battery. Otherwise, the battery moves on to the next workstation”.

Staying safe and sound
The battery assembly shop was designed to meet stringent quality and safety criteria, organised more like a ‘white room’ than a conventional industrial workshop. The project team opted for highly automated processes, in particular for all the operations on the batteries charged to 400V, in order to protect the safety of the operators. Over a third of the operations are performed by robots, compared with just 10% in a mechanical assembly workshop.

Every employee in the battery assembly workshop is specially qualified to work in this unusual environment. The workshop is split into two quite separate safety zones: the 60V zone and the 400V zone. Electrical risks are limited by performing most of the manual operations in the 60V zone. The battery is powered up at the last minute at the end of the line by two specially trained operators. The design office included an opening in the battery housing that is used to connect the modules to one another at the very end of the process.

The plant makes the two-part assembly seals, in order to guarantee the assembly quality of the battery cover. The five-metre long seal is installed by a robot around the perimeter of the cover and passes between the bolts. A robot scans the position of the bolts and sends the exact path to a second robot, which installs the seal, in order to achieve precision of a millimetric order. The sealing and the electric functions of all the batteries are then tested, in particular the charge and discharge cycles. After that the batteries are stored, ready for installation.

Manufacturing the motors
While the vehicle is assembled just outside Paris, the electric motor for the Zoe is manufactured 51 miles north-west of Flins at the Renault Cléon plant in Normandy, which until recently produced the Energy dCi internal-combustion engine. But from mid-summer it will share these facilitiies with the R240 power plant for the Zoe. It took a €300m ($344m) investment to get the factory ready for electric motor and battery assembly. “We aim to become the leading powertrain plant for the Alliance,” says Mendi Ammad, director of the facility. “Cléon was chosen for two reasons: its production base and its engineering and operational teams.”

Much of the machinery and many of the inspection systems installed for the R240 were already in place. This equipment was converted and reconditioned, in part or in full, by Cléon’s maintenance department – saving almost 40% of the investment cost. As well as its production capability, it was the workforce that earned Cléon the engine, both its size and skills level. “All the function experts are on site, for better communication and greater responsiveness,” Ammad adds. “As part of a design-to-cost approach, the teams at Cléon helped the engineering centre to choose the most suitable parts in terms of ease of production and cost control.

“For over two years, the plant has been harnessing its expertise to produce the junction box for the Zoe, connected to an electric motor, which up to now is sourced from a supplier. We developed complete mastery of electronic module assembly and built up robust experience in the production of the power electronic control (PEC) on the R240. 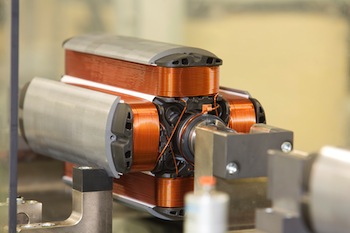 “The highly manual PEC assembly line requires considerable meticulousness, given the diminutive size of the 180 components in question. Three types of test – static, sealing, and dynamic – are carried out on 100% of the PECs to verify some 20 electrical criteria.” With power electronics under control, the teams were able to devote their energy to other areas, such as rotor and stator winding. There they were able to call on the expertise of alliance partner Nissan, which produces its own motor for the Leaf.

“The rotor and stator are key innovations essential to the electric powertrain and requiring a ramp-up in skills on new technologies at Renault,” Ammad adds. “In 2011, Cléon purchased its first rotor and stator winding machines for the plant’s Prototype department. This proved a considerable asset when selecting the technologies and suppliers for the winding machine, in preparation for high-volume production." The stator line boasts the greatest number of process innovations. “The winding, lacing and impregnation operations required prior engineering studies and complex development processes,” Ammad confirms.

As announced this August, Audi will develop the battery for a purely electrically powered SUV using powerful cell modules from the South Korean suppliers LG Chem and Samsung SDI.

The two Audi partners plan to invest in the cell technology in Europe and will supply the German car producer from their European plants. The intention is that this new technology will give drivers of the EV SUV a range of more than 500km.

“Together with our South Korean development partners, we are bringing production of the latest battery-cell technology to the EU and strengthening European industry with this key technology,” states Bernd Martens, member of the board of management of Audi for Procurement.