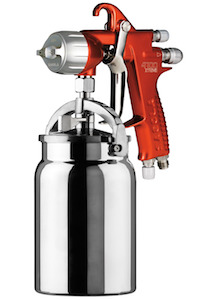 The 4100 Xtreme suction spray gun has been developed to paint larger surface areas commonly associate with commercial and general industrial applications, such as machinery, truck chassis and trailers, says Sagola. The gun’s nozzles and needles come in two variants, 1.6 and 1.8 that deliver fine and heavy atomisation respectively and are, in addition to the air cap, interchangeable.

The company says a one litre aluminium pot is provided that features a double watertight gasket and single piece automatic paint packing gland system with an anti-drip lid. It’s claimed the gun also allows painting at right angles, which is suited to hard to reach places such as a chassis.