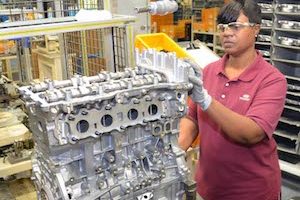 US - The OEM is spending US$388m on a new factory in Alabama that will house the production of engine heads for its next-generation engine. It will also use some of the cash to prepare an existing engine plant, adding new technologies and components in the assembly process.

"With our latest expansion, Hyundai Motor Manufacturing Alabama (HMMA) continues to show its strong commitment to the people of Montgomery and the people of Alabama," the company's president and CEO Dong Ryeol Choi said. "Hyundai is continuing its track record of investing in new manufacturing technologies to ensure the long-term success of our Alabama assembly plant."

The building will spread across an area of 260,000 sq.ft, with construction slated to finish in November 2018. Hyundai hopes to have it up and running by mid-2019.

HMMA already operates two engine plants with a combined output of 700,000 units. They support vehicle production at both HMMA and Kia Motors Manufacturing Georgia, supplying the Nu 1.8-litre 4-cylinder engine as well as the Theta 2.0-litre and 2.4-litre 4-cylinder engines. In March 2017, Hyundai announced that it had made its five millionth engine in Alabama.

The news comes shortly after the OEM unveiled its all-new Veloster and Veloster Turbo at the 2018 North American International Auto Show. These vehicles will use a range of different engines, including a Nu 2.0-litre 4-cylinder engine and a Gamma 1.6-litre turbocharged direct-injection 4-cylinder engine.