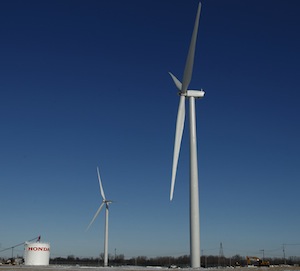 US – The company’s facility in Russells Point, Ohio, will be able to obtain around 10% of its electricity from the two turbines, which have been implemented in collaboration with a ConEdison Solutions subsidiary.

The installation followed an evaluation of renewable energy sources for the plant, which Honda announced in February 2012. According to ConEdison, the Honda Transmission site is suitable for a maximum of two turbines, fitted on 260ft towers and generating approximately 10,000MWH per year.