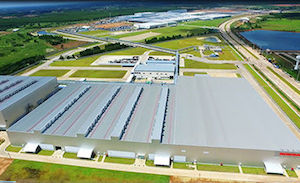 Thailand – The new factory at Rojana Industrial Park, Prachinburi province, represents an investment of 17.15 billion bahts ($48.3m) and features the latest Honda production technology, including the Assembly Revolution Cell (ARC) concept. The plant will strengthen the role of Honda Automobile Thailand within the company’s worldwide network.

“Thailand has increased its presence as one of Honda’s production hubs by supplying products and components not only for the home market but also for the world, including ASEAN nations, which drive our global sales growth,” commented Takahiro Hachigo, president, CEO and representative director of Honda Motor. “I am committed to making certain that the role of Thailand will become even more valuable with the completion of this all-new Prachinburi factory, with full advantage of Honda’s newest production technologies.”

In the ‘flowing cell’ ARC system – implemented for the first time worldwide – assembly workers perform their tasks while being conveyed down the line with the vehicle, together with a full set of parts. Operating as a team of four per ARC unit, the workers thus make fewer unnecessary movements, increasing efficiency by about 10%, according to Honda. Furthermore, this production operation easily accommodates changes in volume due to demand or the addition of other models, because the units can be added singly.

Other modern technologies at Prachinburi include servo control and high-speed feeding on the stamping line, which improve process efficiency by 25% compared with a conventional set-up. On the welding line, Honda adds that the operating ratio has increased by 40% owing to the use of compact and lightweight jigs.

The Thai plant has also adopted sustainable strategies first introduced at Honda Yorii in Japan. Environmentally friendly techniques include the use of natural lighting and a conveyor to recycle water used in the cooling of production operations.

Prachinburi, which has an annual capacity of 120,000 units and a workforce of 1,400 individuals, started mass production with the new Honda Civic in March 2016, having manufactured plastic parts since October 2015, and engines and engine components since February 2016. Honda plans to add sub-compact and compact models in future to increase the competitiveness of the plant in both domestic and export markets.