Mounting pressure on OEMs to reduce the weight of their vehicles means that material and tier suppliers making body panels, interior parts, under-the-bonnet parts, suspension assemblies and the like with glass fibre-reinforced plastics (GFRPs) have been obliged to keep innovating.

While they demonstrate relatively low modulus and possess inferior fatigue properties compared with their carbon cousins, glass fibres possess high tensile strength, high impact resistance and good chemical resistance; crucially, they are also significantly cheaper. Composites reinforced with long or continuous glass fibres can be employed in compression moulding processes, while those reinforced with chopped glass fibres are suitable for injection moulding, both being highly amenable to mass-production.

Glass fibre solutionsThese factors make GFRPs particularly suitable for the production of body panels. General Motors was one of the first OEMs to recognise this; in 1953, it produced its Chevrolet Corvette with an all-GFRP body. GM’s designers appreciated the weight savings that could be achieved by using the rustproof material rather than metals, and it offered a way to create the low-volume Corvette without the expense of large sheet-metal stamping dies.

All Corvettes since have featured composite bodies, although the technology has evolved significantly compared with the rudimentary processes employed in the 1950s. For instance, the use of a sheet moulding compound (SMC) from Continental Structural Plastics (CSP) reduced the weight of Chevrolet’s 2016 Corvette Stingray Coupe by 9kg. A total of 21 body panel assemblies, including doors, decklids, quarter panels and fenders, were moulded from CSP’s TCA Ultra Lite.

TCA Ultra Lite contains treated glass bubbles as a partial replacement for the calcium carbonate filler typically employed in SMCs, reducing the density of the material. This technology also results in a more robust resin mix that makes moulded parts more resistant to handling damage, and prevents the micro-cracks that cause paint pops, pits and blistering. The treated bubbles also help with paint adhesion and bonding characteristics.

The material is reinforced with Owens Corning’s Advantex glass fibre, the manufacture of which has a lower environmental impact than other glass types, according to CSP. Furthermore, the global warming potential of the material can be lower than that of steel in the production and use phases when employed in body parts.

When combined with CSP’s vacuum and bonding manufacturing processes, the company claims that TCA Ultra Lite offers a premium, class-A finish with paint and gloss qualities comparable to metals, including aluminium. The material can withstand the E-coat process and passes all OEM paint tests.

CSP claims that for production volumes under 150,000, tooling costs for composites can be 50–70% less than those for stamping steel or aluminium. Parts with deep draws and aggressive design features can be achieved using one tool in a compression mould, whereas metal might require several different tools and stampings to achieve the same design.

Light yet strong front-endsComposites have also become increasingly popular for the manufacture of front-end carriers, where the materials and processes used for their production allow for many functions to be integrated into a single part. A mix of continuous and discontinuous reinforcements can be employed to ensure that these carriers are strong where they need to be without being over-engineered. For example, continuous fibre-reinforced thermoplastics from Lanxess are being used to reinforce the injection-moulded front ends of Volkswagen’s Atlas and Teramont SUVs, manufactured in the US and China respectively.

The front ends of both SUVs are made from injection-moulded polypropylene. In the area around the bonnet lock, they are reinforced with a 1mm-thick piece of Tepex dynalite 104-RG600. The matrix of this semi-finished composite is made from polypropylene and is reinforced with 47%-by-volume continuous glass fibre rovings in the form of a fabric.

“Both front ends use Tepex inserts, which are around 50% lighter than comparable inserts made from steel sheets. In addition, the reinforced areas can endure much higher strain,” says Lanxess applications developer Harri Dittmar.

On both sides of the front end, the Z struts are reinforced with a shaped insert made from the same Tepex material.

Lanxess claims that the injection moulding process used for these front ends is highly efficient. The side inserts are heated, shaped outside the mould, reheated to 140°C and then placed in the mould from the side. At the same time, the middle insert is heated and then overmoulded together with the two outer inserts. “Despite the complex assembly of the components, the result is an efficient manufacturing process with short cycle times,” Dittmar explains.

The positioning and reshaping of the Tepex inserts in the mould is easily reproducible. Furthermore, drill holes in the composite demonstrate the necessary structural integrity.

Interior applicationsIn interiors too, composites are being used to reduce the weight of a variety of components, even compared with incumbent plastic parts. For example, the 2017 Mini Countryman features an instrument panel carrier manufactured by International Automotive Components using long glass fibre-reinforced polypropylene.

The polypropylene used in the injection-moulded part is Stamax from Sabic, and the part is approximately 15% lighter in weight than if it were made from solid plastic.

The part is manufactured in a tool from Siebenwurst using a structural foaming process. In this approach, the material is injected into and completely fills the mould, which then opens to allow for foaming to occur on the core side of it. This foaming increases the wall thickness of the part from 1.9mm to 4mm, delivering the required strength and rigidity without adding weight. The process consumes less material than standard processes and enables shorter cycle times, according to Sabic.The company performed extensive analysis to predict the warpage behaviour of the part. This evaluation, early in the development process, provided valuable insights for the design of both the part and the mould, enabling the mould to be built correctly at the first attempt.

“This sort of computer simulation is standard practice when it comes to solid plastic parts, but the industry is still in the early stages of developing simulation tools for foamed plastic parts. As evidenced through this programme, we have predictive capability that we can apply today,” states Sabic’s global automotive business leader, Scott Fallon.

Heading for high-volume productionPerhaps the most striking illustration of what can be achieved with GFRPs has been provided by automotive parts supplier Benteler-SGL. The company is manufacturing transverse leaf springs from a glass fibre-reinforced polyurethane for Volvo’s XC90 crossover SUV (the first vehicle produced on the OEM’s Scalable Product Architecture, SPA), the S90 luxury sedan and the V90 station wagon models. As an integral part of SPA, the leaf springs are likely to feature in other models too.Almost 200,000 of these will have been produced by the end of 2017, with Benteler-SGL talking about volumes of closer to 500,000 by the end of 2018, making it the highest volume composite components project in the automotive industry. 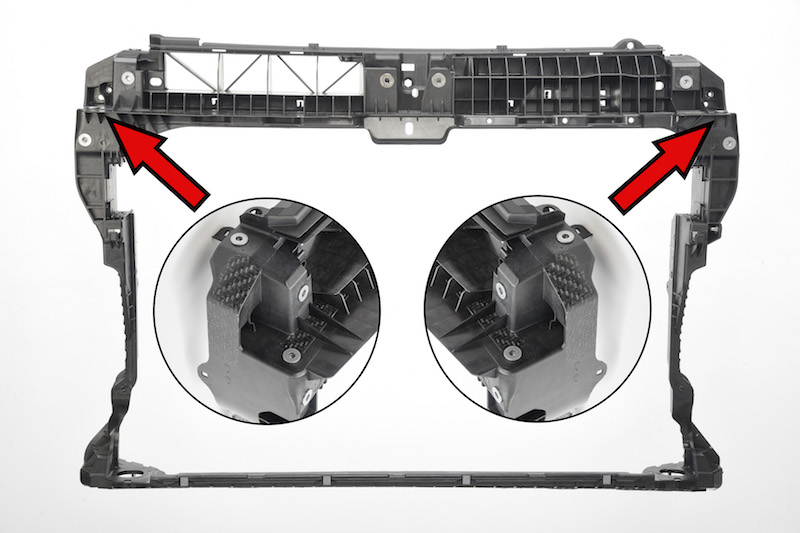 Composites are increasingly used for the production of front-end carriers

The composite leaf spring is used instead of the usual array of coil springs. This results in a compact design as well as a weight saving of some 4.5kg compared with the conventional concept. Further benefits include a smoother ride and improved noise, vibration and harshness behaviour. The volume of a vehicle’s boot is also increased because there are no suspension turrets.

The polyurethane matrix employed in the leaf springs is Loctite Max 2 from Henkel, which worked with Benteler-SGL to develop the highly automated high-speed resin-transfer moulding process used to produce the components.

Head of business development at Benteler-SGL Automotive Composites, Frank Fetscher, says: “The example of our leaf spring for Volvo Cars demonstrates that fibre composite mass production is today already a reality. What is more, with this flexible component design, we are able to cover an entire platform with a relatively small number of spring variants.”