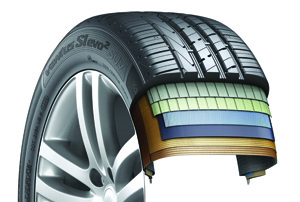 Germany – The third generation of the vehicle will be factory-equipped with the Korean company’s Ventus S1 evo2 SUV, an ultra high-performance product. The tyre, which will mostly be made in Hungary, is described by Hankook as an “all-new” design specially developed for this vehicle category.

The Ventus S1 evo2 SUV features a multiple tread radius and double-layer rayon carcass, a “DTM-inspired” three-layer block configuration with staircase arrangement of the outer rib blocks, plus a refined cooling system. A highly developed silica compound with an optimised cross-linking system also improves the performance and ageing characteristics, according to Hankook.

The BMW X5 is the fifth model from the German car-maker for which Hankook will supply original equipment, after the MINI and the BMW 1, 3 and 5 series. The Ventus S1 evo2 SUV will also be available in the aftermarket from spring 2014 in sizes ranging between 17 and 22 inches, covering aspect ratios 60 to 30 with tread widths from 225 to 315.