Hams Hall ramps up for i8 engines 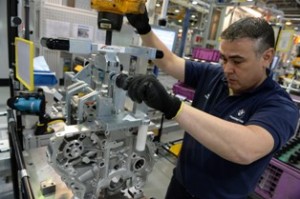 UK – A new facility has been developed at BMW's plant near Birmingham for production of the three-cylinder TwinPower Turbo technology petrol engines – the first of a new generation of engines to be built there.

Plant director Nick Spencer said: “Our plant is going through a huge transformation, and we are excited to see the first of our brand-new engine assembly facilities ramping up production. The new three-cylinder petrol engines will enable the BMW i8 plug-in hybrid sports car to set new standards for dynamic performance in combination with industry-leading fuel efficiency and low carbon emission levels. With the exclusive supply of these engines coming from the Hams Hall plant, we are proud to be contributing to this innovative new sports car.”

Each engine is built by a small team of people, all of whom previously worked at the plant and have been specifically recruited and trained to work on the new engines. Ramping up production of this new facility forms the first part of a multi-million pound development programme at the Hams Hall site which will continue into next year.