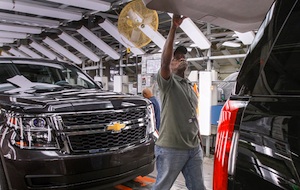 US – The investment will see the plant reconfigured with a new paintshop, bodyshop and general assembly area upgrades. Construction is expected to begin this summer and take around three years to complete; GM says the production of Chevrolet Tahoes and Suburbans, GMC Yukons and Yukon XLs and Cadillac Escalades will be unaffected by the work.

Since 2011, GM has invested nearly $2 billion in manufacturing improvements at Arlington Assembly and this latest upgrade is a part of the $5.4 billion earmarked for its US manufacturing operations over the next three years. The 60-year-old plant celebrated building its 10millionth vehicle in March 2015.