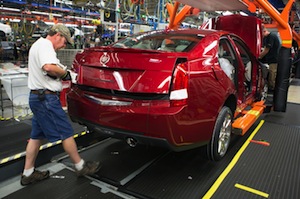 US – When it comes online in 2016, the newly constructed area of the OEM’s Lansing Grand River Assembly Plant will produce stamped components for Cadillac ATS and CTS vehicles, plus an unnamed future product. GM estimates that its investment will save around $14m each year in logistics costs linked to material handling.

Built in 2001, Lansing is GM’s second-newest US assembly plant and produces not only the Cadillac ATS and CTS but the CTS V-Series performance versions. Since 2009, the facility has received investments in the region of $530m out of a total of $11 billion announced by GM for its facilities in the US.

“Lansing Grand River Assembly is known for the high quality of its work and the flexible manufacturing that has been a trademark since it opened,” said Christine Sitek, GM North America manufacturing manager. “Today’s announcement demonstrates GM’s commitment to strengthening key plant capabilities related to quality and efficiency.”