GM cuts back its Russian operations 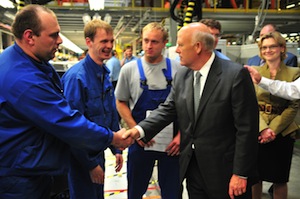 Russia – In the year it was supposed to be making 230,000 vehicles, GM Auto in St Petersburg will idle by mid-2015. The contract assembly of Chevrolet vehicles at GAZ will be discontinued around the same time, while the Opel brand will leave the market by December. GM says it will focus on the premium market with Cadillac and US-built Chevrolet cars such as the Corvette, Camaro and Tahoe.

“This change in our business model in Russia is part of our global strategy to ensure long-term sustainability in markets where we operate,” said GM president Dan Akerson. “This decision avoids significant investment into a market that has very challenging long-term prospects.”

Opel Group CEO Karl-Thomas Neumann added: “We do not have the appropriate localisation level for important vehicles built in Russia and the market environment does not justify a major investment to further localise.”

GM Auto opened in 2008 and the expansion to more than double its capacity of 98,000 vehicles per year formed part of plans by the US manufacturer to invest $1 billion in Russia over five years. The newly announced changes will cost around $600m, primarily in the first quarter of 2015.

The GM-AvtoVAZ joint venture will continue to build and market the current-generation Chevrolet Niva. The American OEM says Cadillac will be “set up for growth in Russia over the next several years” as it prepares for multiple product launches.

“We had to take decisive action in Russia to protect our business,” said Neumann. “We confirm our outlook to return the European business to profitability in 2016 and stick to our long-term goals as defined in our DRIVE!2022 strategy.” The company is aiming for a European market share of 8% and a profit margin of 5%.