Geared up to the maximum

The number of gears in transmissions is increasing, but OEMs may be about to hit an upper limit 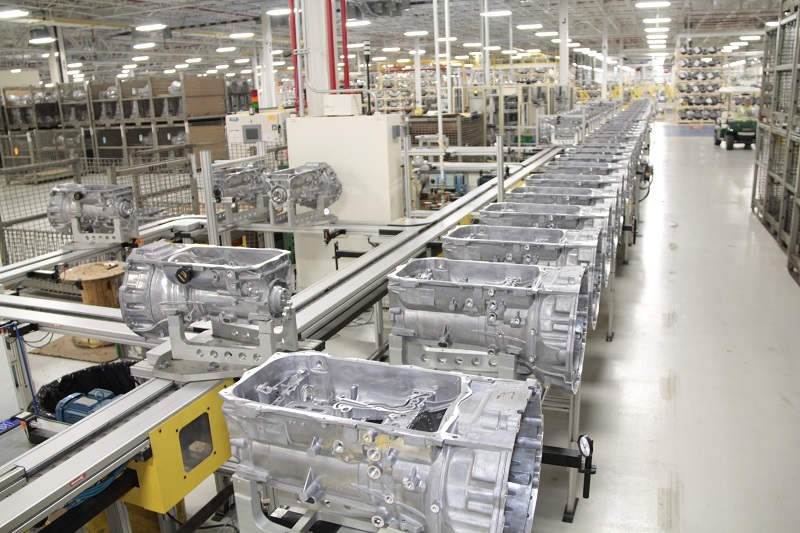 Although fuel economy was the initial driver, it is not the only advantage of adding extra gears. “You not only get a fuel economy benefit but also a performance benefit,” Champine continues. “You get better launch performance and you are able to reduce engine rpm at higher gears. So your overall highway fuel economy is much improved. In addition to that you also have smaller ratio steps between the gears, which provides a certain level of driving comfort. When you are at highway speeds you need a less aggressive pedal input.”

Although these gearboxes would seem to add complexity, Champine believes that the benefits far outweigh any concerns. “That was one of the reasons that we partnered with ZF,” he adds. “There are a number of ways of arranging the transmission architecture to provide eight or nine gears. It’s the analysis that goes into selecting the best architectural arrangement that delivers the number of gears, but also delivers that architecture in its most efficient form.

“The art of this process of selecting the right eight- and nine-speed gears goes into the analysis of the architecture and the arrangements of the components inside the transmission. Primarily, it is about the clutch systems and the planetary gear set to deliver a very efficient transmission.”

Transmitting change to mainstream manufacturing
At present, the nine-speed gearboxes are mostly used on high-performance vehicles, but this is likely to change. “Our nine-speed transmission would certainly fit a broader portfolio of our products,” Champine says. “Given the efficiency benefits, it is reasonable to expect it to appear in a number of future applications, some of which, although the vehicles aren’t in production yet, have already been announced. Among those are the Promaster City and the Jeep Renegade; both have the nine-speed transmission.” 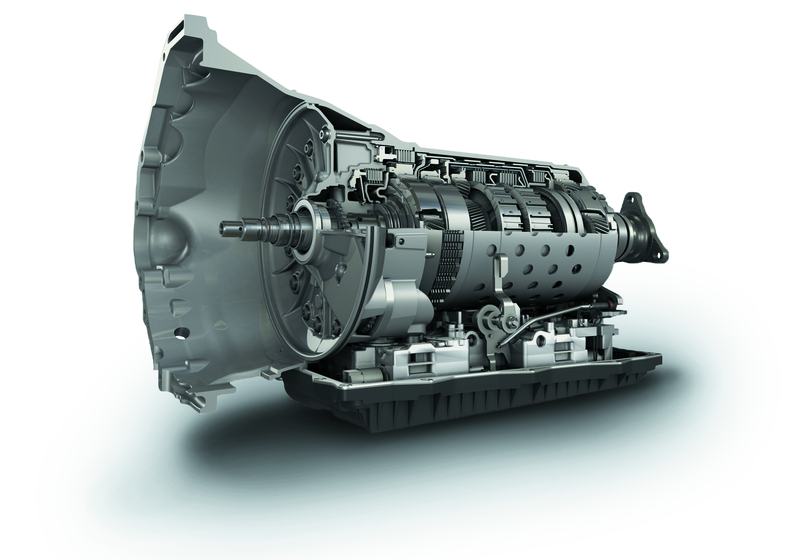 Champine reports that the associated materials, assembly and manufacturing are all similar to those of conventional gearboxes, the biggest challenges being the precision and dimensional control required in today’s transmissions compared with previous generations. “It isn’t in the architecture, arrangement or assembly,” he says. “What we are talking about is conventional planetary transmissions with higher-precision components.

"In the past, where we had tolerances at a given level, now they are much tighter. It is interesting because the capability of the equipment manufacturers and the industry has improved along with the increase in dimensional control. There are not huge hurdles that the eight- and nine-speed transmissions create. It is really just the tighter dimensional control.”

When the TorqueFlite 8HP45/845RE made its debut in model-year 2012 as the world’s first eight-speed unit available outside the luxury market, the transmission was mated exclusively to the Chrysler 3.6-litre Pentastar V-6 in the Charger and Chrysler 300 line-ups. Since then, the TorqueFlite 845RE and 8HP70 have migrated, respectively, to Pentastar- and HEMI-powered versions of the Dodge Durango, Ram 1500 and Jeep Grand Cherokee line-ups. Internally, the transmission features four gear sets and five shift elements consisting of multi-disc clutches and brakes. Only two shift elements are open at one time, which reduces drag losses stemming from the rotation of multiple parts.

Downsizing & downspeeding
According to Jurgen Greiner, head of passenger car transmission development at ZF Friedrichshafen, the two trends for gearboxes are: “Downsizing, which means turbocharged engines with fewer cylinders and less engine displacement; and downspeeding, which is the reduction of the engine speeds combined with a maximum torque that is applied at a very early stage.”

It is the reduction of the speeds in particular that demands transmissions with a higher spread, which is the reason why ZF has increased it from 7.0 to 7.8 on the new 8HP by optimising the gear sets. "This measure alone reduces the speed across all gears by 50rpm on average and reduces fuel consumption by almost 1%," Greiner explains. “Furthermore, the ZF developers have succeeded in reducing the internal transmission losses, through the new multi-disc separation. Additional springs integrated into the multi-disc packages of the shift elements ensure that the friction shift elements are almost fully opened and, consequently, cause less drag torque. Compared to the first 8HP model range, we have reduced the power losses by more than two-thirds with the new generation."

A further innovative function minimises the creeping torques: a clutch is now fully opened during deceleration and when the vehicle is stationary. "Consequently, it is no longer necessary to brake against the drive," states Greiner. 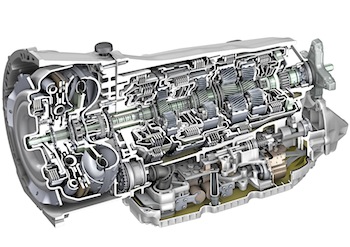 Mercedes is the latest company to join the nine-speed club, with the 9G-Tronic that it launched earlier this year for its premium vehicles. It made its debut in March in the E350 BlueTEC, which the company claims is one of the most fuel-efficient six-cylinder diesel models in its class. The overall reduction in engine speed improves comfort and on the other hand also cuts down external noise by up to 4dB(A), thus reducing the strain on the environment. The broad ratio spread of 9.15 for gears one to nine allows a clearly perceptible reduction in engine speed and is a decisive factor behind the high level of energy efficiency and ride comfort.

For the nine-speed automatic transmission, the development engineers focused on compact lightweight construction. Although featuring two additional gears and a maximum transferable torque of up to 1,000Nm, the new automatic transmission requires no more installation space than its predecessor and also weighs less. The two-piece housing design has been retained, with the torque converter housing made of lightweight aluminium, while the transmission housing, featuring a weight-optimised plastic oil pan, is made of magnesium alloy.

Another goal was to implement the nine gears with a minimal number of planetary gear sets and shift elements. Intensive, computer-based system analysis and mock-up made it possible to realise this goal, resulting in four simple planetary gear sets and six shift elements. Three speed sensors monitor its operation and provide the transmission control system with data for efficient shifting. So it is possible for several gears to be jumped when accelerating or decelerating, should the driving conditions call for it.

In the 9G-Tronic, the individual gears are engaged by three multi-disc clutches and three multi-disc brakes. The purpose of the multi-disc clutches is to transfer the drive torque between two components as a friction connection. The ratio configuration of gears one to nine allows a wide ratio spread of 9.15. For the same performance compared to preceding transmissions, the rpm level is considerably lowered. The actuating unit for the electric transmission oil pump, control unit, all the electro-magnets, as well as the complete sensor system, comprising rpm, temperature, pressure and position sensors, are combined on a single mounting bracket. The control unit becomes the command centre and is incorporated into the electronics architecture of the vehicle.

For those not looking to move into the nine- and ten-speed gearbox set, the other option that is gaining ground is dual-clutch technology. The DSG dual-clutch gearbox, available in VW’s six-speed and seven-speed versions, is unlike a conventional automatic transmission. Two independent gearboxes are connected under load to the engine in turn, depending on the current gear, via two drive shafts. An output shaft assigned to each gearbox applies the torque to the driven wheels via the differential gear. Clutches and gearboxes are operated hydraulically by the gearbox mechatronics.

Renault has developed a new six-speed, dual-clutch transmission gearbox entitled Efficient Dual Clutch (EDC). The EDC is a combination of two parallel half gearboxes, which work together and are both designed like a traditional manual gearbox. The engine torque is transmitted to each half gearbox via a specific clutch. One clutch looks after the odd-number gears (first, third and fifth), while the second clutch covers the even-number gears (second, fourth and sixth), as well as reverse. At the perfect moment, gears are changed by shifting from one clutch to the other; the first clutch opens whilst the second closes simultaneously, guaranteeing continuous and smooth traction during gear changes.

The gears are carried by four shafts: two concentric primary shafts (each of which is connected to a clutch) and two secondary shafts. Gears are matched by means of synchronisers, as is the case with a manual gearbox. These synchronisers, like the clutches, are operated by electric actuators, which are in turn controlled by a control unit that measures a number of parameters to select the ideal gear.

Developed for medium-sized trucks, Eaton has developed a medium-duty, dual-clutch transmission that is claimed to deliver 8-10% better fuel economy than a similarly equipped vehicle with a torque converter automatic. “We engineered a host of features that instil confidence and maximise efficiency for operators with routes on hilly, difficult terrain, or those who navigate tight turns and traffic as part of an urban route,” says John Beering, senior vice-president and general manager, Eaton Commercial Vehicle Transmission.

“The highly efficient dual-clutch technology with a closed-loop control system significantly reduces slip and steady state losses that are associated with torque converter automatic transmissions. The dual-clutch module is fully contained within the transmission, hydraulically controlled and oil cooled for extended life. A five-spring damper is used to control torsional vibrations and is fully sealed to eliminate contamination.” 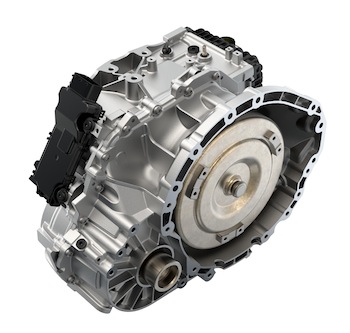 Last year, Ford and General Motors joined forces to develop an all-new generation of advanced technology nine- and ten-speed automatic transmissions for cars, crossovers, SUVs and trucks. The plan is for the new transmission to be used in both front- and rear-wheel drive variants.

This is not the first collaboration between the two companies; their partnership has already delivered 8m six-speed, front-wheel drive transmissions to customers around the world. “The goal is to keep hardware identical in the Ford and GM transmissions,” Lanzon adds. ”This will maximise parts commonality and give both companies economy of scale. However, we will each use our own control software to ensure that each transmission is carefully matched to the individual brand-specific vehicle DNA for each company.” At present full details of the new transmission remain sketchy, although it is expected to start production next year.

More generally, although there are a few ten-speed gearboxes on the drawing board, Champine feels that OEMs may have hit the ceiling as far as the number of gears is concerned. “I don’t think it is a marketing competition for the company who has the most gears,” he explains. “It is really about how you use the gears. Making ten-, 11- or 12-speed gearboxes, there will come a limit where you don’t get the benefit of the ratio spread."

He concludes: "I don’t see the advantages of going further than we have. We have competitors who have announced projects for ten-speed gearboxes in rear-wheel drive cars, but I don’t see many applications that would exist beyond eight-, nine- and ten-speed; I think we have reached our limit.”