Ford’s Fumes-to-Fuel project has been developing systems to use VOCs to power fuel cells for nearly a decade. Its next installation will produce 300kW of power per hour, the company says

While their long-term effects are not completely understood, Volatile Organic Chemicals (VOCs) are believed to be among the most poisonous by-products resulting from vehicle manufacturing and the limits on their presence in finished cars is under on-going downward pressure. The best way of dealing with such toxins is to stop using them but it’s not possible to achieve this right away and the compounds they are carried in, such as paint, have beneficial effects as well. The second best solution is to ensure that they do not get into the local environment. In paint shops, this involves expensive filtering and scrubbing of the ventilated air, followed by incineration of the VOCs in thermal oxidisers at temperatures of up to 1,500°C; a process that is expensive in itself and also adds to total emissions of CO2.

Different thinking
For a few years, Ford Motor Company in North America has been thinking differently and seeking to turn a costly activity into a fiscal and environmental benefit. In 2004, Ford launched its Fumes-to-Fuel technology with a pilot installation at the Dearborn Truck Plant. The project used a 5kW fuel cell and served as a temporary test site. The following year, the company installed a new generation of the technology at its Michigan Truck Plant (MTP) in Wayne, which used a 50kW Stirling engine to generate electricity. The MTP system is still in operation. 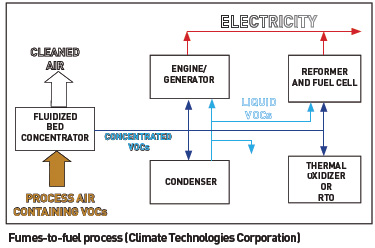 been installed in a 10,000 sq ft (1,000 sq m) Fumesto- Fuel facility next to the paint shop at Ford’s Oakville Assembly Complex near Toronto, Ontario. It captures the VOCs within the ventilation system and then moves them through four filtration chambers. They are condensed and turned into a hydrocarbon mixture that is ultimately transformed into a hydrogen-rich liquid fuel, which is fed to a fuel cell to produce electricity. The process is intended to provide energy to help operate the plant, while reducing greenhouse gases.

Government support
Ford did not install the system without a bit of encouragement. The Provincial Government in Ontario has introduced some pretty stringent pollution regulations and, along with the stick of legislation, came the carrot of governmental support – in the case of the Fumes-to-Fuel project at Oakville Assembly Complex, this amounted to CAN$100 million from a total budget of CAN$500 million for Ontario’s 2004-2009 Automotive Investment Strategy. It was reported in September 2012 that Oakville’s air quality had improved dramatically over the past six years, with particulate pollution down by one-third. The Ford system is claimed to save money, as well as pollution, because the need for expensive incinerators – and the power to run them – is eliminated. It is applicable to any activity that produces VOCs and the company claims to have been contacted by manufacturers across the world.