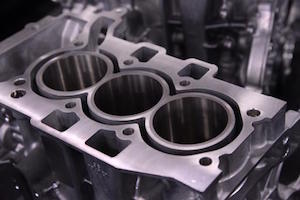 France – The PSA subsidiary in Douvrin assembled the milestone turbo PureTech three-cylinder petrol engine on March 19. The facility started making the engine type in March 2014 and now completes 6,450 per week.

“Our PureTech petrol engine is a key factor in the success of the models it is fitted on,” commented Denis Martin, operational director Europe. “Given current trends in the petrol/diesel model mix, the performance of this excellent three­-cylinder engine gives PSA a competitive edge that our front-line teams can leverage to win market share.”

The turbo PureTech powers the Peugeot 208, 308, 2008 and 3008, the Citroen C3, C4, C4 Cactus and C4 Picasso, plus the DS3 and DS4. According to the manufacturer, it cuts fuel consumption and CO2 emissions by an average of 18% in comparison with its naturally aspirated EP predecessor.

Française de Mécanique makes the 1.2-litre turbo engines, along with the Xiangyang plant in China. The two facilities have annual capacities of 320,000 and 200,000 units respectively. The 1.0-litre and 1.2-litre naturally aspirated engines have been made since 2012 at Treméry, France, which has a capacity of 640,000 units.