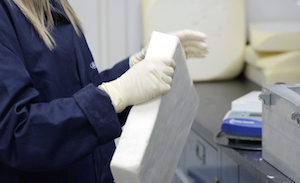 US – Claiming the development as an industry first, Ford says it has successfully formulated and tested foam and plastic components using CO2 as feedstock. The company plans to use the new biomaterials in production vehicles in the next five years, reducing petroleum consumption by millions of pounds per year.

Ford’s senior technical leader of sustainability, Debbie Mielewski, described the development as “exciting, because it is contributing to solving a seemingly insurmountable problem – climate change”. She said the OEM is “working aggressively” to reduce its environmental impact by cutting its use of petroleum-based components. Ford expects to use the newly developed products in seating and under-bonnet applications.

The foam made with up to 50% CO2-based polyols is “showing promise”, says the OEM, after meeting stringent automotive test standards. If used in production, it could potentially save more than 600m pounds of petroleum per year, according to current estimates.

Ford began its captured CO2 research in 2013 in partnership with several companies, suppliers and universities. The OEM has been working with CO2-based polyols from Novomer, a New York company which produces polymers using CO2 from factories. The materials formulated from these polymers, including foam and plastic, are said to be easily recyclable.

Over the past two decades, Ford has already developed sustainable materials including the soy foam which is used in every North American Ford vehicle. Coconut fibres contribute to boot liners; recycled tyres and soy are used in mirror gaskets; T-shirts and denim are turned into carpets; and plastic bottles are made into Repreve fabric for the 2016 F-150.