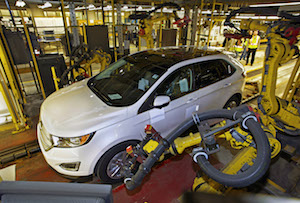 US – The OEM announced that certain plants in North America will not close for the full two weeks as usual due to strong demand for SUVs, with sales at a record high for the first five months of the year. Ford will make an extra 22,000 units this summer.

The assembly plants in Louisville (Kentucky), Chicago (Illinois) and Oakville (Canada), plus their supporting stamping facilities, will close only for the week of July 4 for building maintenance and machine retooling. Besides these SUV factories, Kentucky Truck will also cut its summer shutdown in order to prepare for the launch of the new Super Duty pick-up later this year.

Ford has made sales of 325,475 SUVs up to May this year, a 9% increase on the same period in 2015. This is the fourth consecutive year that the OEM has shortened the summer shutdown at one or more plants in order to meet high demand.