The presentation of a new development in computational fluid dynamics from Mentor Graphics.

The fundamental equations for describing the movement of liquids – fluid dynamics – have been around for a long time but it’s really only with the introduction of computer-assisted calculation techniques that they have become accessible to engineers, according to Dr Keith Hanna, director of marketing and product strategy for Mentor Graphics. 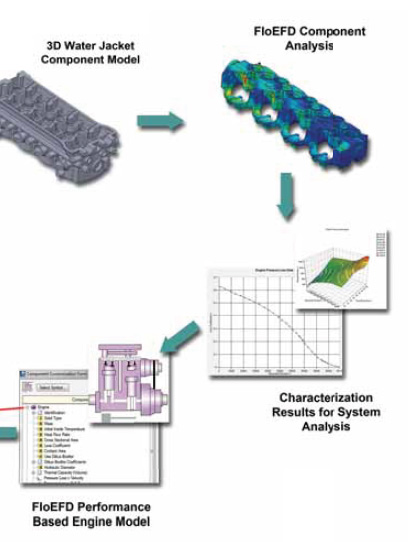 This has enabled them to become an invaluable tool for engineers and designers working to produce more sophisticated and efficient systems – especially in the area of automotive development and production. Dr Hanna points out: “The extent of this area of technology is huge – as an industry it’s growing at around 15% per year.” Oregon, US-based Mentor Graphics is a 30-year-old company historically specialising in electronic systems. Previously this sector was largely separated from the mechanical engineering sphere in terms of operations and markets. However, in recent years there has been far more integration of electronic and mechanical engineering, due to advances in technology and the demands of market forces. Through acquisitions, Mentor has developed its expertise beyond offerings to its clients in electronic design automation (EDA), and associated services in the Mechanical Design space with both hardware and software solutions.

Physical prototyping
“One of the biggest challenges in modern manufacturing, and this probably applies to most industries, is the speed and cost of physical prototyping,” explains Dr Hanna. “The advent of simulation software has allowed engineers to create an accurate simulation of the final product way in advance of any production. This allows them to identify and design-out any problems or risks ‘upstream’ of manufacturing.” The further upfront the prototyping stage the less risk involved when going into production. It also provides engineers with more information to improve the design. “Automotive manufacturing is a good example of this because simulations can be created for systems as well as individual components,” says Dr Hanna.

Fluid dynamics is an area that has benefited from simulation software but until recently it still required dedicated, highly qualified experts to work through a long process of calculations to arrive at possible design solutions, usually downstream in the development process . Mentor says it has assembled a package of software solutions that streamlines the process of computational fluid dynamics (CFD) to enable both system designers and engineers to make use of it.

Mentor’s CFD solution combines both 1D Flowmaster and 3D FloEFD simulation software. The company says that 3D CFD technology has, in the past, been a standalone solution but Mentor has now embedded 3D CFD simulations into 1D systems simulation CFD software. As Dr Hanna points out: “Automotive is probably one of the biggest users of CFD technology, representing around 40-50% of the market, and this is because they are compressing the design cycle and time to market.”

Fluid movement
Mentor’s recent acquisition of Flowmaster gives the product another dimension, allowing the ability to model and simulate not just the functionality of a complete system but also an individual component (a valve for example) and how it interacts with the rest of the system. Flowmaster’s 1D empirical CFD data, when combined with 3D CADembedded CFD (FloEFD) software, enables both fluid (or air/liquid) movement reference data to be applied to a working computer model, which the company says gives a highly accurate simulation.

Dr Hanna offers an example: “Looking at a 3D model of a cylinder head, the engineer can test the flow of coolant, oil or air through the structure and the application of the 1D empirical data will allow the 3D model to accurately represent the fluid movement within the structure. The engineers and designers can then look at geometries and thermal transfer characteristics, making alterations where necessary.” The company claims this reduces the timescalesfor the process from days to hours. 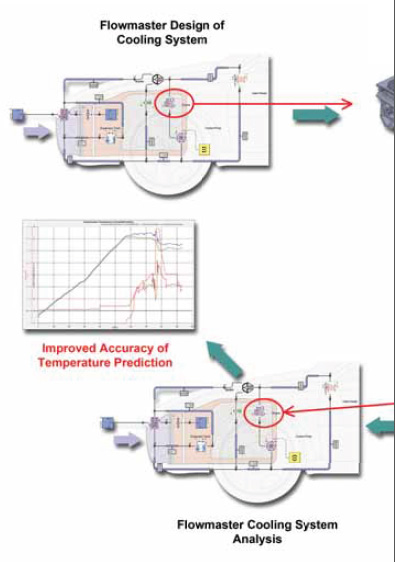 1992, which carried out a huge number of fundamental, physical measurements of valves at different openings, pressure drops, drag coefficients etc. All of this valuable information, previously only available in textbooks, was combined into a software package by Flowmaster.

This enabled OEM and Tier 1 suppliers to calculate the type of valves and pumps required by different applications. Dr Hanna adds: “Always using good data produces good systems – the problem has been getting good data.” Mechanical and electrical systems can suffer from transient responses, which in some circumstances can lead to a catastrophic failure. The company says that Flowmaster allows these to be accurately simulated in advance.

Up-front engineering
Flowmaster product line director, Morgan Jenkins explains the ease of use and applications of a combined Flomaster- FloEFD: “We believe that this native coupling we have developed offers engineers the ability to take advantage of the both 1D and 3D systems without having to deal with the disadvantages. They get both the speed of systems CFD processes and fidelity of 3d CFD data. This delivers what is call ‘up-front’ engineering. That is, moving the simulation of systems and components further up the design process, providing more information sooner allowing more informed decisions rather than guess work.” Jenkins describes how the system allows a database of information to be created, with data from each 3D simulation being stored for reference and also shared between a design or engineering team. “The database also tracks the information creating a history, ensuring that users can access the up-to-date simulation data.”

Data characterisation
Jenkins runs through an example involving the application of the software on a vehicle cooling system. “The system engineer will understand the parameters that the cooling system needs to operate within. What they want is the greatest fidelity of information to create a model but typically, in the past, they would rely on test data or ask a 3D CFD engineer to run a lengthy simulation. Now they can present the test criteria to an MCAD engineer who will be able to run the tests within the specified parameters on a 3D CFD model producing a real-time simulation of the operation of the engine’s cooling system.

“Water-cooling jackets in a cylinder head or engine block are among the most complex shapes found in automotive powertrain and without this type of simulation the available cooling/flow performance data would be far less accurate, making it hard to fine-tune the design.”

Jenkins continues: “Once the engineer has run a number of 3D simulations and gathered the data, the results are saved as a file known as a ‘characterisation’. With the assembled data this characterisation file can be interrogated at a later stage to provide performance calculations, reducing the need to conduct further simulations.”

Drive cycle
As well as vehicle OEMs, the system is will also provide benefits for Tier 1 and 2 suppliers, claims Jenkins. “The component suppliers need to get their products validated to ensure they meet the customer’s requirements. So by utilising this type of simulation they can test the component within the context of the system it’s intended for.” Heat, or rather the management of it, is a major challenge for powertrain designers. Increased crash protection built into the vehicle body, and more ancillary components means less air circulation around the engine bay. Jenkins describes the use of the simulation software for this application. “As we mentioned, Flowmaster is able to simulate transient changes to provide an accurate representation of a component or system’s performance. With this it’s possible to put the simulation through a vehicle drive cycle.” So with the characterisation data from the simulation on the coolant system available in the database, the company Mentor says the thermal management performance and behavior of the engine can be accurately tested through the drive cycle. So while the days of cars sitting, overheating at the side of the road due to poor design are behind us, the flip-side is that without accurate, detailed information, the engineer is inclined to be conservative and perhaps over-engineer the cooling system.

Following their presentations we asked Morgan (MJ) and Keith (KH) how this software solution was being received in the automotive industry:

AMS: Have you been trialing this system with any OEMs?
MJ: Not currently, but it is being evaluated by a number of automotive consultancies who work with OEMs and some Tier 1 and 2 suppliers.
AMS: How much fine-tuning is possible? For instance, using fluids with different flow and thermal characteristics.
MJ: You can input material characteristics. Information such as how viscosity is affected by different degrees of pressure and temperature can be calculated by the software and saved into a fluid properties file for future simulations.
AMS: Will the software take into account the materials used in the engine’s construction?
MJ: Depending on the simulation, the materials might not be the focus of the test, but you can input the thermal characteristics of say, cast iron or aluminium, accounting for the thickness and structural design of the component.