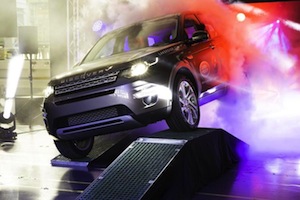 UK – Made at Halewood, the pioneering production vehicle is destined for the Virgin Galactic headquarters, where it will be used by the team preparing to launch the world’s first commercial ‘spaceline’.

“The new car embodies Land Rover’s spirit of ‘Above and Beyond’, so it’s fitting that it will be used by a similarly pioneering company in Virgin Galactic,” said Murray Dietsch, director of Land Rover Programmes.

The latest model in the Land Rover line-up has created 250 new jobs following a $256m investment at Halewood. The plant already makes the company’s fastest-selling model on record, the Range Rover Evoque, and has seen its workforce treble over the last four years, with 4,750 individuals now employed there. Investment at the site has more than doubled.

The production launch of the Discovery Sport has involved supply contracts worth $4.47 billion being awarded to 55 UK companies.