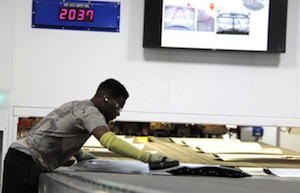 US – The vehicle-maker invested $63m to update the capabilities of its 65-year-old Michigan plant with the latest stamping technology, which will increase capacity by up to 12,000 hits per day or around 3.6m parts per year. Until now, the most modern press line at Warren Stamping Plant was more than 15 years old.

FCA US said the new high-speed servo tandem press, an 180-inch press line, is the first of its kind at Warren Stamping and the only one currently in use across the company’s North American production network. Construction work for its implementation took nearly two years.

“Installing a new press line is always a major undertaking,” commented Brian Harlow, vice-president of Manufacturing, FCA North America. “However, completing installation of this new press line while continuing to run the plant at peak capacity was an exceptional challenge and a tremendous accomplishment.” He said the new servo tandem press line would help the company to meet a surge in demand for its vehicles which has resulted in 69 consecutive months of year-over-year sales increases in the US and record sales Canada.

The latest press line is designed to increase output, reduce the complexity of the process and cut energy use while enhancing reliability and maintainability. The servo drive enables fully programmable control and movement of the ram speed at any position in the press stroke, in contrast with a fixed-speed mechanical press; this flexibility allows more frequent and faster dies changes, performed in about four minutes versus 20 minutes for older presses.

Warren Stamping has 12 other major press lines and three large, progressive lines, together generating an annual capacity of around 84m parts. The facility employs more than 2,000 personnel. The output goes to US, Canadian and Mexican plants for the assembly of a variety of vehicles:

Warren Stamping will also support production of the 2017 Chrysler Pacifica, which will launch in the first quarter of the year at Windsor Assembly Plant, Ontario.