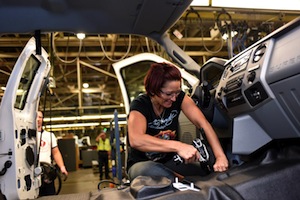 US – The medium-duty trucks are being made in the country for the first time, after Ford transferred production from Mexico. The move required investment of $168m and secured more than 1,000 hourly jobs at Ohio Assembly Plant.

Announced in 2014, the investment involved the addition of new bodyshop equipment and tooling. The production shift from Mexico was part of a collective bargaining agreement negotiated between Ford and the United Auto Workers in 2011.

“Our investment in Ohio Assembly Plant reinforces our commitment to building vehicles in America and to delivering best-in-class commercial trucks,” said Joe Hinrichs, Ford president, The Americas. “Working with our partners in the UAW, we found a way to make the costs competitive enough to bring production of a whole new generation of work trucks to Ohio.”

Ohio Assembly opened in 1974 and employs nearly 1,400 individuals. In addition to the F-650 and F-750, the plant produces E-Series cutaway vans and stripped chassis. The 2016 F-650/F-750 line-up features Regular Cab, SuperCab and Crew Cab body styles and straight-frame, dock-height and tractor models. Unusually for medium-duty trucks, the diesel engine and transmission combination is produced in-house by the vehicle-maker.