As the EV market expands, some vehicle-makers are experimenting with different powertrain technologies 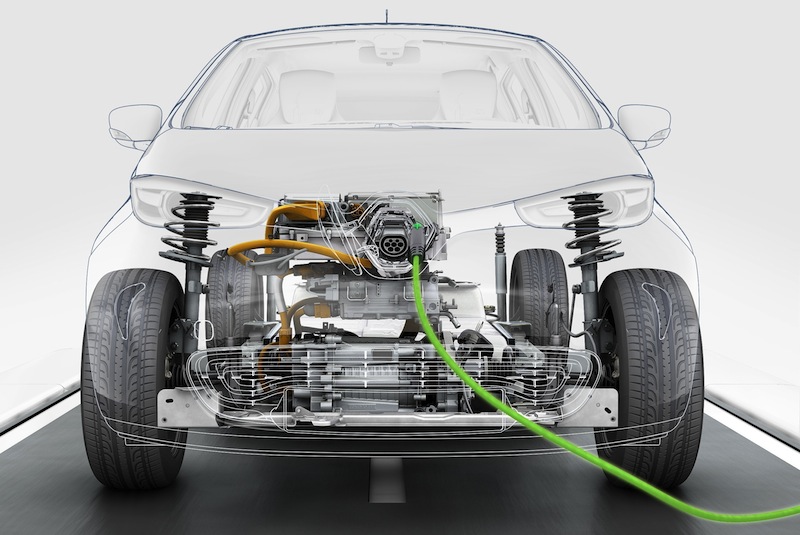 The global EV market these days is worth big money – over $73 billion in 2014 and expected to reach about $109.8 billion by 2019, with a compound annual growth rate of 8.5% from 2014 to 2019. There are three main technologies for the electric motors needed to power the steadily growing portfolio of vehicles: magnetic motors, induction motors and synchronous motors with rotors. The vast majority of the market is opting for the tried-and-tested technology of magnetic motors, but two companies are following a different path: EV stalwart Tesla, which has previously used induction motors, and more recently Renault, which has chosen synchronous motors for its Zoe model.

“I think the reason they don’t go the same route as us is because it is tricky to master this technology, particularly the control,” comments Bertrand Largy, expert leader, electric powertrain and battery, at Renault. “It takes a long time to master this and tune the engine in an efficient way. Most of our competitors know what we know but feel that it is too difficult to master.”

Zoe’s new R240 motor offers superior performance and consumes less energy than its predecessors, while offering a longer driving range and faster charging times. It features an innovative design and architecture, with 95 patents filed to date. There have been two principle areas of focus: improved electronic management to cut electric energy consumption on the move; and a new system to reduce charging times at low power levels.

When designing the new motor, Renault focused on integrating components which have helped to cut its size by 10% without sacrificing performance. This opens up new opportunities for the motor to be fitted to smaller cars. The R240 is a synchronous electric motor with rotor coil, with a power output of 65kW and torque of 220Nm.

“By controlling the current that goes into the rotor, we can control very precisely the magnetic field,” says Largy, explaining the advantages of Renault’s approach. “This allows us to adjust the operational parameters of the motor and optimise efficiency. With other motor technologies, such as permanent magnets or induction motors, you have just two parameters to control: the stator voltage and the stator current. We have a third parameter, the current in the rotor. By using three parameters instead of the usual two, we can optimise the efficiency better.”

Renault keeps capabilities in-house
The French OEM started producing electric motors in 2011 in collaboration with Continental, but for the R240 the company decided to go it alone. “There are several reasons why we decided to do this ourselves,” states Largy. “One of the reasons is that the motor is at the heart of the automobile. You will not find any major car manufacturer that does not manufacture its own engines, because it is core to the product. It is about safeguarding the technology for the future; it is very important to have the know-how in house.

The second-generation Chevrolet Volt uses a new battery system which maintains a T configuration but has nearly 100 fewer cells
“The second reason is that we think we have better possibilities to make rapid and incremental improvements; we are more flexible if we have our own design and manufacture this in our own plant.” Largy explains that some of the capabilities required are very close to those traditionally found within the company for building internal combustion engines. However, some are completely new, such as winding and insulation. “These are brand-new technologies for us,” he says. “We have had to increase our skill levels in some areas and master these technologies.” However, Largy insists that the overall manufacturing approach remains the same: “You always have to think about quality, high-volume production, managing variations.”

He adds that it was “no surprise” when Renault had to develop a supply chain for R240 production. “We already knew the key players from our previous collaborations, but we had to build our own supply chain. We had to go into great detail with wiring suppliers, magnetic field suppliers, and insulation material suppliers. This had to be completely transparent.”

While much of the focus on EVs has centred on the battery pack, Largy insists that the power unit is equally important. “You need innovative technology for both the battery and the motor,” he explains. “Of course, the battery is very important because it defines the amount of energy that you can utilise inside the car, but the electric motor defines how you can use this energy. If you have a very good battery together with a poor motor that has low efficiency and high electric consumption, then the result is not good.”

Renault’s model, he says, is “to balance an efficient electric motor that can use the energy provided”, optimising the energy consumption. This extends the range to 240km as well as securing good performance and driving characteristics; but efficiency is “top of the list”, says Largy. “When working on the design, it is always a trade-off between cost, complexity, efficiency and weight. That trade-off we always pushed towards the best possible efficiency.”

Chevrolet takes two-motor approach
The new propulsion system of the 2016 Chevrolet Volt will offer an estimated total driving range of more than 400 miles (643km), and with regular charging owners are expected to be able to travel more than 1,000 miles between gas fill-ups. “We believe our engineering prowess, combined with data from thousands of customers, allows us to deliver the most capable plug-in vehicle in the industry,” says Andrew Farah, vehicle chief engineer at Chevrolet. “According to independent surveyors, Volt owners are the most satisfied in the industry and they were our compass for developing the next-generation model.”

The new two-motor drive unit is up to 12% more efficient and 100lbs (45kg) lighter than the first-generation unit. The two motors operate together in more driving scenarios, in both EV and extended-range operation. The ability to use both motors helps to deliver a 19% improvement in electric acceleration from 0-30 mph (2.6 seconds) and a 7% improvement from 0-60 mph (8.4 seconds). The second-generation Voltec extended-range electric vehicle (EREV) propulsion system is the power behind the 2016 Volt’s increased all-electric driving range, greater efficiency and stronger acceleration. It was engineered in accordance with the driving behaviours of first-generation Volt customers, who were found to complete more than 80% of their trips without switching from electric power.

Audi’s hybrid includes quattro drive
When it comes to plug-in hybrids, the Audi Q7 e-tron quattro sets new standards with its 373hp output and 700Nm torque. The large SUV accelerates like a sports car from 0-100km/h in 6.0 seconds but consumes no more than 1.7 litres of fuel per 100km. It is the first plug-in hybrid car to combine a six-cylinder diesel engine with quattro drive. 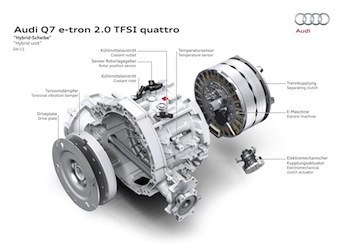 The Audi Q7 e-tron quattro is the first plug-in hybrid car to combine a six-cylinder diesel engine with quattro drive
The disc-shaped electric motor provides 94kW and 350Nm of torque. Together with a decoupler, it is integrated into the eight-speed tiptronic. The automatic transmission is outstanding for its high efficiency and low weight. The quattro, permanent all-wheel drive – also compact and lightweight – transmits power to all four wheels. During fast cornering, its centre differential works closely with the wheel-selective torque control system, an intelligent software feature.

The lithium-ion battery consists of 168 battery cells and is fluid-cooled. With a capacity of 17.3kWh, it allows a 56km range in electric mode. Another efficiency component is the standard thermal management system with integrated heat pump, specially developed for the Q7 e-tron quattro. This enables the waste heat from the electrical drive components to be made available to the interior of the vehicle.

With brushless machines, the rotor includes two or more permanent magnets that generate a DC magnetic field. This magnetic field enters the stator core and interacts with currents flowing within the windings to produce a torque interaction between the rotor and stator. As the rotor turns, it is necessary for the magnitude and polarity of the stator currents to be continuously varied such that the torque remains constant and the conversion of electrical to mechanical energy is optimally efficient. The device that provides this current control is called an inverter. Without it, brushless motors are useless motors.

Unlike the DC brushless rotor, the induction rotor has no magnets, just stacked steel laminations with buried peripheral conductors that form a shorted structure. Currents flowing in the stator windings produce a rotating magnetic field that enters the rotor. The frequency of this magnetic field as encountered by the rotor is equal to the difference between the applied electrical frequency and the rotational frequency of the rotor itself. Accordingly, an induced voltage exists across the shorted structure that is proportionate to this speed difference between the rotor and electrical frequency. In response to this voltage, currents are produced within the rotor conductors that are approximately proportionate to the voltage, hence the speed difference. These currents interact with the original magnetic field to produce forces – a component of which is the desired rotor torque.