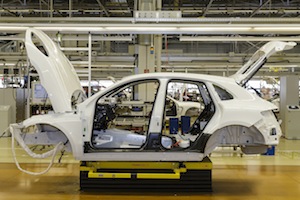 Since the financial implosion in 2008 we have become used to reading about astronomical sums of money being spent and lost. So much so that I think we have become blasé about these figures. Millions of euros or dollars now seem like pocket change and it takes hundreds of millions for us to take notice – and billions to feel truly significant (Audi, BMW and Nissan spending in the billions recently springs to mind). So, as we regularly read of the sums that OEMs are investing in new production facilities, it’s only as you sit back and start to add up the numbers that the sheer scale of expenditure becomes apparent.

How much of a chance are these companies taking with such high levels of investment? It stands to reason that every cent of expenditure is carefully weighed against risk and return, but with some markets fluctuating and production being cut in some areas, large-scale investment is continuing in certain countries.

Russia’s current politicking in Crimea is further undermining a volatile market and creating currency woes for those OEMs reliant on importing a high percentage of parts. For instance, Ford has announced reduced production volumes and workforce layoffs at its plants in Russia due to poor demand. Yet Volkswagen, undeterred, has so far said that it will continue with previously announced investments in production facilities in the country. The German carmaker also confirmed that it won’t be changing its plans to invest $10 billion in Brazil, despite reports that it might lay off approximately 900 workers at two of its plants there.

Deep pockets certainly help with these decisions, but clearly VW is taking a long-term view and has confidence that these fluctuations in the market are only blips. Porsche has also invested heavily, albeit in the calm economic waters of the German market, launching full production of its new Macan SUV at Leipzig. The company will obviously be looking for good volumes on this model, but again it is entering a highly competitive segment of the market.

Perhaps the biggest risk has been taken by BMW with its i3 electric car. Investing €400m in production facilities and processes for what, initially at least, is likely to be a low-volume seller certainly feels like the company has taken a leap of faith. And while I’m on the subject of going out on a limb, Ford has caused some furrowed brows by switching its bestselling F-150 pick-up to an all-aluminium body. Making this kind of change takes a chance with a large and loyal customer base because it could alter consumers’ perception of the vehicle, no matter how well engineered the new version is.

However, it seems that vehicle makers have little choice but to continuing investing; the market demands new models, innovative designs and technology. In this environment, model ranges look old very quickly, and a fickle market can easily upset planned production volumes.