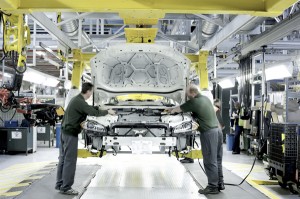 The partnering of brands and big companies is nothing new in the automotive industry. In fact the proliferation of joint ventures, mergers and acquisitions makes it hard to keep track of exactly who owns what share of whom.  It’s often the failed partnerships that stick in the memory but equally there are plenty of past and present success stories to consider. And it’s the ‘what ifs’ that get you thinking. From the current crop, Tata’s purchase of Jaguar and Land Rover is a great example. To begin with you have the Indian automotive giant seemingly coming to the rescue of two iconic motoring brands, and both Jaguar and Land Rover have flourished in recent years. Now demand for the premium segment vehicles (particularly Land Rover) is stretching production capacity and investment in manufacturing sites and technology is increasing dramatically (see Jaguar leaps forward as an example). At the same time Tata’s fortunes have waned with sharp falls in the Indian car market, so now JLR has become the (relatively) prosperous partner. And here the ‘what if’ question comes in.  JLR has clearly done well having the right model line up at the right time, but what if Tata hadn’t acquired the companies from Ford back in 2008? Would JLR be leading the way in aluminium vehicle construction and expanding its manufacturing footprint outside the UK?

Fiat and Chrysler are another example of a successful acquisition and reversal of fortune. The North American and European markets have clearly played a major part in the current state of health of both car-makers, but the ‘what ifs’ still abound.  Less visible but just as interesting and important are the collaborations between OEMs and their suppliers. Interesting because these are where very specific manufacturing solutions are developed, tested and put onto the line; important to the on-going development of lighter, more efficient vehicles. These collaborations go further still, along the value chain of manufacturing. Some of these were revealed during the technical sessions at our recent manufacturing conference in Pune, India. Equipment and system suppliers regularly work together on given projects where core competences overlap. Again delivering important solutions.

Innovation and co-operation were recurrent themes at the conference. With the Indian car market currently in a slump, the OEMs present talked of turning a crisis into an opportunity and said that innovation would be key to the future of India’s automotive industry. But clearly this will need the combined efforts of Tier, equipment and materials suppliers, and it’s evident that co-operation is as strong as competition.  Looking forward, the next phase of collaboration will be between man and machine. We covered this fascinating development in last year's November-December issue of AMS and it was raised again at the conference by KUKA’s Frank Petrolli, whose presentation highlighted the potential of collaborative robots in assembly operations.