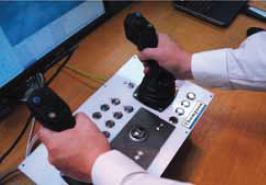 Thompson Automation Systems claims its new joystick unit can transform a standard industrial robot into an intelligent manipulating tool. Rather than just performing pre-programmed automated tasks, it allows a regular robot to be manually guided through a series of routines with up to six degrees of freedom.

The joystick features programmable virtual walls which are configurable for permissible/non-permissible working and minimise the risk of accidental damage when in manual mode. In addition, it is designed to work with Kuka’s new KRC4 controller as well as its KRC2 version without any modification to the system or robot hardware.